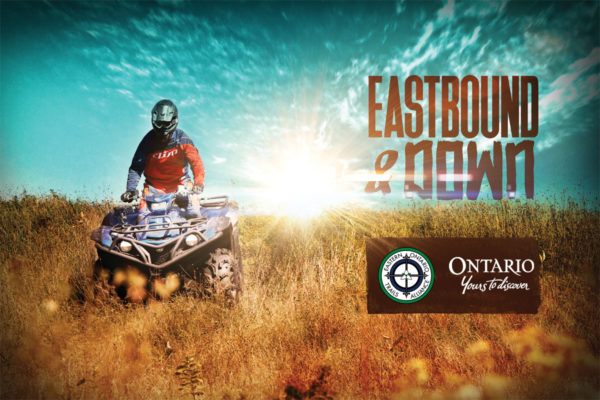 The Eastern Ontario Trails Alliance is more than a trail system. It`s a glimpse into the future.

Two days before, on an unseasonably warm late summer Friday, the ATV World crew pulls into a trailhead parking lot in Glen Tay, an hour west of Ottawa, and just outside Perth, Ontario. We have come for a weekend of riding on the Eastern Ontario Trails Alliance (EOTA) system, of which Glen Tay is its eastern terminus. Suiting up and cinching down helmets, the five of us jump onto a pair of ATVs and a pair of side-by-sides, and throttle westward toward the Town of Sharbot Lake, our destination for the evening. Steep rock cuts dramatically line the decommissioned railbed, and arching trees create a canopy of shade most welcome on this near 40-degree day—but still we’re tempted by the pristine lakes we pass—how cool would it be to plunge into the lakes’ chilly depths?

Few pursuits make a beer taste better than a day’s ATV ride, and dinner is washed down with good cheer and a spirited bull session on the deck of the Sharbot Lake Country Inn. But morning comes quickly, and we’re up and off, and down to the village park for the 2nd annual Central Frontenac Trail Day. 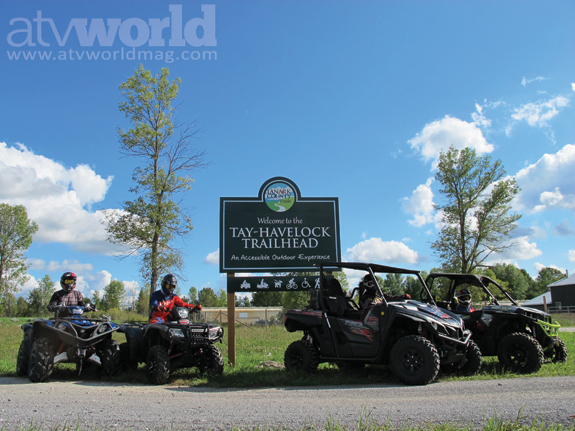 The EOTA was founded in 1997, with the goal of coalescing support from various stakeholders to create a trail system that covers a broad geographic region. It’s no secret that ATV enthusiasts envy the organizational might and the linked trail systems of snowmobile clubs, and the EOTA could be considered a model of an ATV trail system for the future. But there’s more to the EOTA than just ATVs. 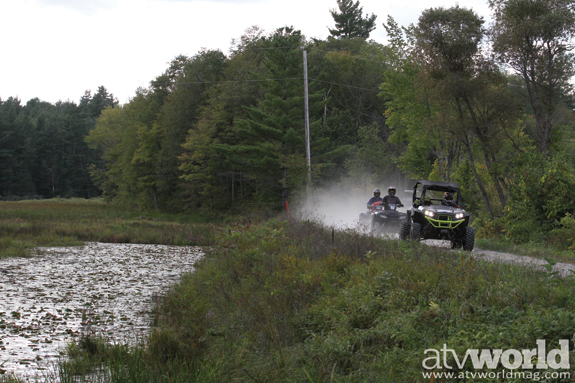 Perhaps the key to the EOTA’s success (700 kilometers of marked trails) is its broad “shared use” mandate, to encourage everyone to get into the great outdoors. The system requires a pass, which varies in annual cost from $35 for cross-country skiers to $75 for dog sled teams, (seriously) to $150 for ATV and motorcycle users. That diversity is represented in the village, as we see mountain bikers and dirt bikers and hikers, all ready for a day on the trail.

We register for the self-guided ATV ride and head north of Highway 7 with a map to guide us, and ride through the evocatively named Snow Road Station and Mississippi Station before hunger sets in, and we return to Sharbot Lake—to be welcomed back to the town’s park by a brass band playing on a stage, next to a vintage train caboose. While we wolf down pulled pork on a bun, graciously prepared by the Sharbot Lake Masons, speakers brave the PA system’s feedback and thank everyone for coming out, while stressing the community-building benefits of the cash infusion that EOTA trail users bring to the region. As the band retakes the stage, we take our queue and depart for the town of Renfrew. 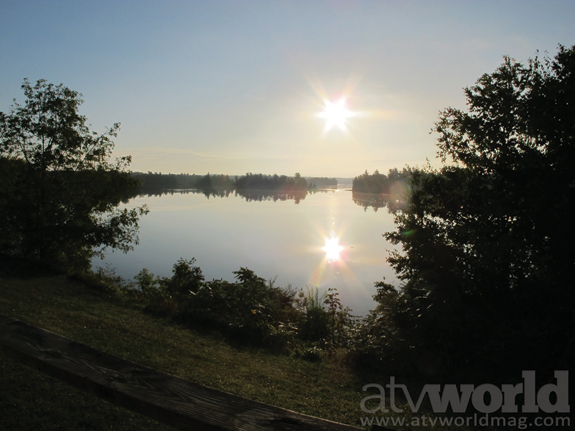 While travelling unfamiliar off-road trails, it can be difficult to get a sense of how long it will take to get to your destination. One older man tells us it will take seven hours to go from Sharbot Lake to Renfrew, (he’d be right—if you did the journey entirely in reverse) but most opinions we solicit suggest about three hours. The advantage of a railbed-based trail system is the rapidity with which you can make it from one region to the next, which means less trailering to see more territory. That’s a win-win, but man cannot live by railbeds alone. 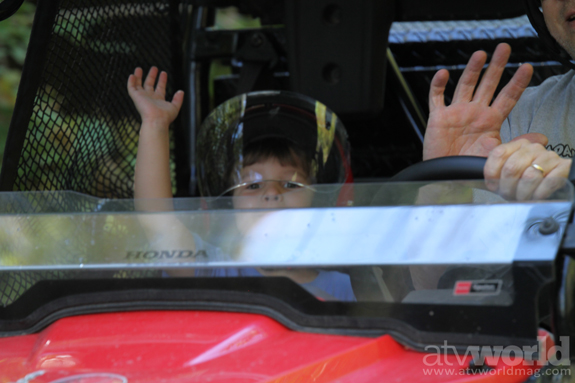 After the smooth running on the trail north from Sharbot Lake, we divert onto the Barry Lake Trail, just south of the town of Calabogie, which brings us back to the rock-strewn hill that looks like the side of a mountain. Yamaha’s Wolverine hops and jumps and skitters from rock to rock, and just grazes the chain link fence on its way up the hill, but it makes it. Easily. And the trail just gets better. Steep rises are followed by sharp descents and—even though we’ve had an unusually dry summer—plenty of mud. And that’s where we stay, and play, for half a day. By the time we latch onto the trail from Calabogie to Renfrew, we look like we’ve been dredged from the bottom of a lake. 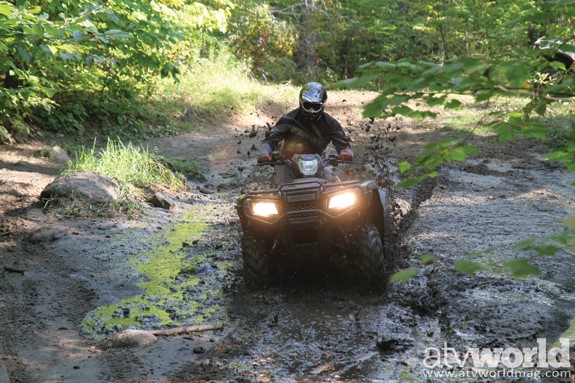 Reservations have been made at Rocky Mountain House, a curiously-named but charming inn and restaurant (schnitzels and steaks the specialties) in the heart of Renfrew. As our quartet pulls into the parking lot, a dozen or more cruiser riders give us a sideways glance, and fuss over immaculately clean Harleys. While they’re cleaner, we suspect we’ve had more fun. 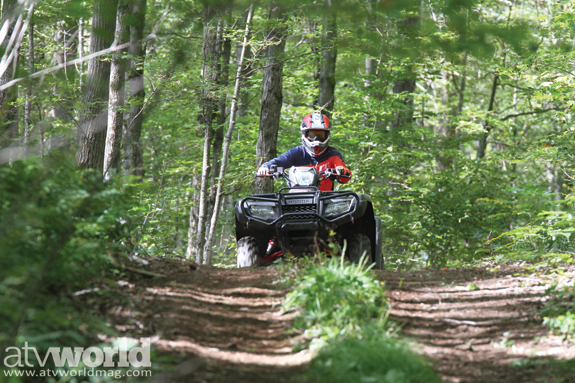 The balmy early September temperatures make us reluctant to go inside for dinner, so we hit the patio, only to be pelted by falling acorns from a mighty oak overhead—yet another sign of fall’s approach. A reshuffling of patio umbrellas solves the problem, but we’d by lying if we said we didn’t chuckle at the diners the next table over, who were fishing acorns out of their beer. 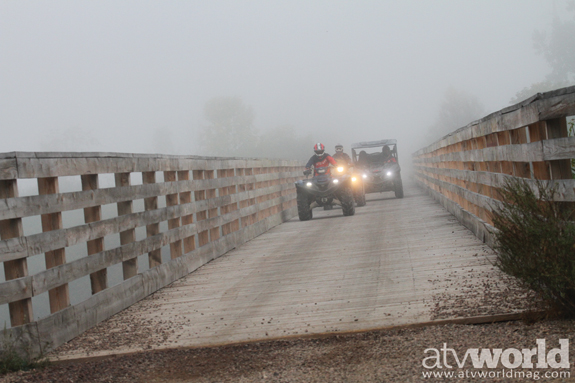 Sunday dawns with thick fog, and after breakfast we pull out of the hotel’s parking lot and begin our way southward back to Glen Tay and our trucks and trailers. By the time we reach Calabogie, skies clear to a brilliant blue, and we circumnavigate lakes and cross briskly flowing rivers that cut through dark and dense forests. We’re all reluctant for the ride to be over, but tomorrow is a work day, and besides, today won’t end until we’ve had an evening date with the power washer.

The Eastern Ontario Trails Alliance is a template for a model of what modern ATVing could become if stakeholders in other jurisdictions set aside petty squabbling for the good of the sport. But until that day comes—and mark our words, it will—we’d suggest loading up and heading east. More info on the EOTA at thetrail.ca. 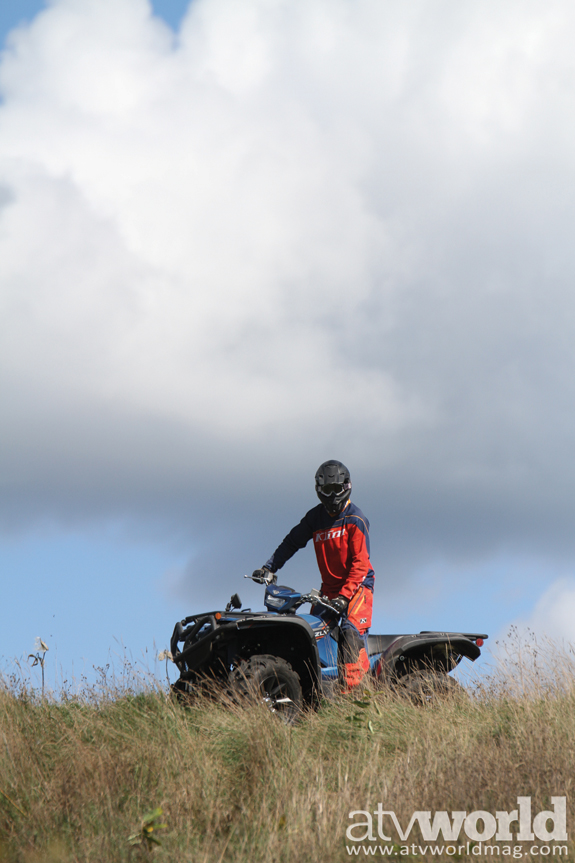