ATV World Utilizes the “One Pass” and Rides Park-To-Park 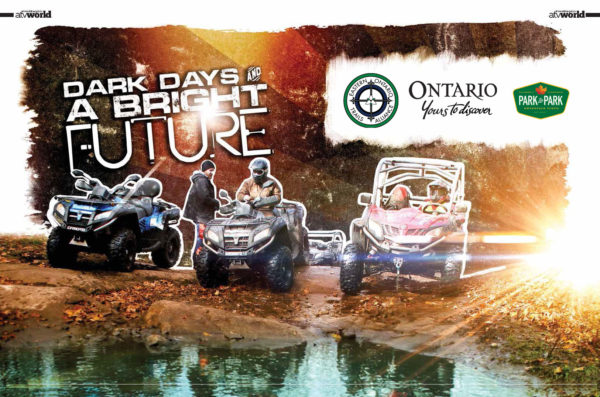 We’re going through that? Ontario’s  Park-to-Park trail system is a gem, even if it entails a portage or two.

Be careful what you wish for. The last time the ATV World crew headed out for an adventure—on the Eastern Ontario Trails Alliance network, for a ride from Perth to Renfrew, and points between—we lamented the searing heat and incessant dust. (But don’t think we didn’t have a great time. Grousing about weather is just what men do.) But there isn’t any dust this time as we head north from Toronto, because you don’t have dust when the dirt is submerged in water. And the summer’s heat? Long gone to the south with the departing geese. But just because it’s cold, grey, and damp, don’t think we’re not going to have a great time.

Parry Sound, Ontario, means one thing to children of the 1970s; the town’s most famous son – Bobby Orr—the Boston Bruins supernova who revolutionized the game of hockey—was born here. It doesn’t matter that he split half a century ago. What matters is that every pond adjacent to the trail that leads from our base at Grand Tappattoo Resort on Otter Lake into the town of Parry Sound, could have been where Orr, in a childhood shinny game, was bruised by a puck wristed off his shin, or tripped by a neighborhood kid, jealous of his skill.

And because the town of Parry Sound really likes it when off-roaders drop money at restaurants and gas stations and hotels, when the trail ends at the edge of town, you can legally ride your machine on city streets, right up to the front door of the Charles W. Stockey Centre for the Performing Arts, which houses the Bobby Orr hall of fame. That’s what we call inviting.

But we’re not in Parry Sound to fawn over a superstar. We’re here to utilise our EOTA “One Pass”  ride the evocatively named Park-to-Park trail system that stretches from Killbear Provincial Park, just north of Parry Sound,eastward to our most storied provincial park—Algonquin.

The genesis for the 230 kilometer trail reaches back to 1998, when a steering committee was formed at the behest of the Parry Sound and Huntsville town councils. In 2001, the Park-to-Park Trail Association was incorporated, and the nitty-gritty of building, marking,and maintaining a trail that bisects ten municipalities began. It was arduous work. The very beauty of the land—swampy lowlands and towering cliffs of jagged rock—complicated trail building (not to mention the every-present challenge of finding consensus amongst ten municipalities). By 2011, the originally envisioned trail was complete, but of course, the work to maintain the system never ends.And that’s not just rhetoric to get you to fork out for a required and enforced trail pass.

Our guide for the trip, local enthusiast and trail volunteer Gavin Courvoisier, stops his CFMoto ATV at an embankment that runs down to a bridge that spans a river. Heavy rains carried away sand and stone, leaving a deep chasm in the middle of the trail. There is room to thread around the obstruction, but clearly it requires remedial work. He tells us the cost to hire an excavating company to haul the necessary fill, deep into the woods to restore the trail, has been quoted at an eye-popping $11,000. While Gavin laments the work required, our eyes drift over to a wood stove-equipped warming shack (in the city we’d call it a starter condo). However, Gavin, who is a hell of a lot tougher than ATV Worlds of ties, abruptly jumps back on his machine and sprints into the distance. What choice do we have but to follow?

The irony of the trail washout is that the summer was exceptionally dry. But when the rains came, they came with avengeance. Rivers are vigorously flowing, lakes are filled to the brim, and every so often, the trail disappears for extended stretches beneath water. And it’scold, in the way that October-nearly-November can seem like the coldest season of all. As we huddle around, huffing warm breath into our hands, we remind ourselves that today—with the temperature hovering slightly above freezing—would be a mild day for snowmobiling. Regrettably, our optimistic mind-over-matter approach fails. After a long hot summer, we’re not used to this, and we’re just too damn cold. Time to get a move on. If there’s a morsel of advice we could offer anyone about to embark on a lengthy trail ride, it’s to not overestimate the distance you can travel in a day. Sure, you could hammer along the main trail and make it to Algonquin in jig-time, but by doing so, you’ll miss some spectacular riding along the way. When Gavin veers off the main trail, we wonder what he has in mind. We needn’t wonder for long.