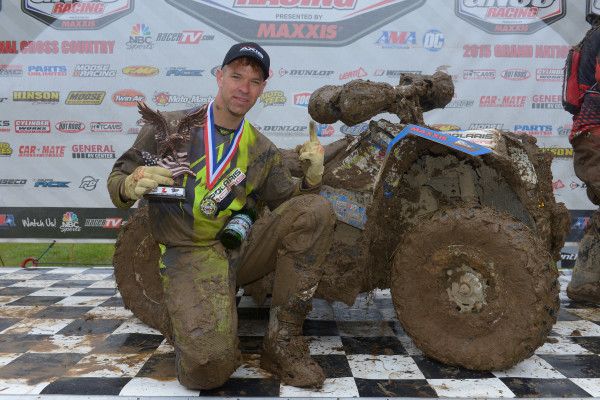 Team UXC Racing would head to Springville, Ind. for GNCC Racing’s Round 5, the Limestone 100 this past weekend and leave with two wins for the Scrambler 850.

It would be Michael Swift’s day taking the 4×4 Pro Class and morning overall on his Scrambler 850. Off the start, Team UXC teammates Kevin Trantham and Swift quickly worked their way to the front of the class just in what was set to be a wet and slick day of racing. Swift took the lead around the 4-mile marker on lap one with Trantham close behind. On the start of lap two, Swift managed to create a small gap between him and his class, which he was able to build on each lap. Despite the rain, which made the course more difficult, Swift was able to hold his lead all the way to the checkered flag with 1 minute and 40 seconds to spare. The win would be Swift’s first of the season and moved him into third place in the class standings for the year, with Trantham, who finished fifth, sitting in second.

Off a third place finish last race, Team UXC Racing’s 4×4 Senior Racer Don Higbee would also take the win on his Scrambler 850 for his first win of the season. Higbee sits in third for the season in the class.

The next GNCC race is the Tomahawk, in Odessa, NY, May 9-10, and the next UTV and Single Seat Race will be the Mountaineer, at Marvin’s Mountain Top, in Masontown, West Virginia, May 23-24.