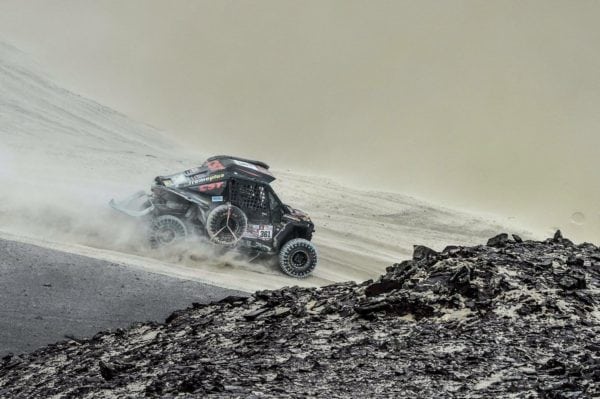 The Dakar Rally is an annual “rally raid” that has been spooling up dust since its inception in 1978. Now, 30 years later, the 2018 event just wrapped up with a host of newcomers and long time Dakar veterans attempting arguably the world’s toughest once again. In terms of the UTV aspect of the event, one particular standout was the Xtreme Plus Polaris Team. Although they weren’t able to clinch that ever elusive top step of the podium, they did manage to safely lock down the next three overall finishing positions in 2nd, 3rd and 4th. If you were a sponsor of that team you may even consider that consistency at this particular event just as impressive as taking the overall! The facts are Dakar is a torturous 15 day event with 14 tests, and any manufacturer of OEM or aftermarket accessories with parts on the Xtreme Plus teams buggies has a claim to hang their hat on with those type of results.

The folks down at CST were particularly thrilled with the results of the team and the CST tires the they rolled in on. Below we’ve included a Press Release from CST covering the race for the Xtreme Plus Polaris Team:

Overcoming some of the world’s most merciless terrain, riders from the CST-sponsored Xtreme Plus Polaris Factory Team took second, third, and fourth places at the 2018 Dakar Rally, held January 6-20. With each Polaris vehicle outfitted with CST’s Lobo RC tires, Polaris was the most successful manufacturer in the SxS class at this year’s brutal off-road endurance event. 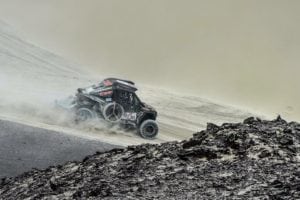 These finishes are all the more remarkable in light of the fact that, as Nick DeGroot put it in a 2016 essay on Vice Sports, “The Dakar Rally is considered by many to be the most dangerous, most difficult, and most grueling race on the planet—and for good reason. It’s a vicious race that puts a whole new spin on the phrase ‘To finish first, you must first finish.’ We aren’t just talking about vehicles making it to the end, but people, too. Twenty-eight participants have perished since its inception and dozens more have narrowly escaped the same fate in pursuit of Dakar glory.” (https://sports.vice.com/en_us/article/qkydn5/the-dakar-rally-the-most-dangerous-race-in-the-world)

France’s Patrice Garrouste and Switzerland’s Steven Griener earned their share of Dakar glory by taking second overall. Finishing in 73 hours, 41 minutes and 43 seconds, they won five stages of the Dakar Rally, beating the competition in Stages 4, 6, 10, 11, and 13. 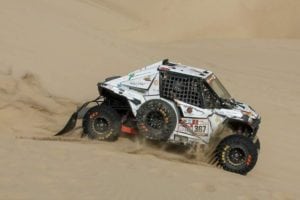 Team Director Marco Pianam: “We are happy with the result. It was a good balance for the Xtreme Plus Polaris Factory team. We had five total stage wins by Garrouste and one by Aliaga Anibal. What is exceptional is that in the first 30 cars’ overall classification, we can find four SXS: Garrouste in 25th, Fournier in 28th, and Peña 29th. The Dakar Rally requires technical ability, good machines, and strong drivers and co-drivers; this was more important than pure speed. We are sure that the category will get stronger and stronger and grow even bigger in the future.” 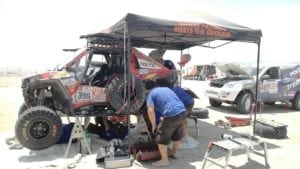 “For us, it is a pleasure to help drivers achieve their dreams. Peña had a lot of emotion, as it was his dream to finish a Dakar since he was a child. In the last stage, Fournier did a brilliant job of controlling the race and making no mistakes to maintain his position. He was the best performing Polaris driver with a non-turbo machine, which is a testament to his fantastic efforts.” 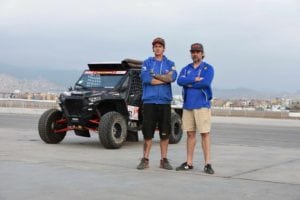 “We want to say a big thank you to Polaris, Motul and CST Tires that they trust in Xtreme Plus and in SxS. In 2019, we will come back stronger and get the awards back that Xtreme Plus has won since 2012.”

The course of this year’s race covered 12 cities and 5463.7 miles (8793 km) from Lima, Peru through Bolivia to Cordoba, Argentina. Riders sped through desert terrain and over dunes, rocks, mud, and other obstacles at various stages of the race, which annually receives TV coverage in over 190 countries, including on NBC Sports Network in the US.

CST thanks all of these riders for choosing its Lobo RC tires and congratulates them on achieving spectacular results in the Dakar Rally, one of off-road racing’s most demanding events.

CST brand tires are offered by Cheng Shin Rubber Ind. Co. Ltd. (Cheng Shin Tire). Employing more than 25,000 people, Cheng Shin Tire is the largest manufacturer of bicycle and motorcycle tires in the world and offers products in many other categories as well. Distributed in more than 150 countries, the CST brand covers a wide range of market segments. CST products include tires and tubes for bicycles, motorcycles, all-terrain vehicles, autos, trucks, forklifts, agricultural and lawn and garden equipment. For more information, visit www.CSTtires.com.