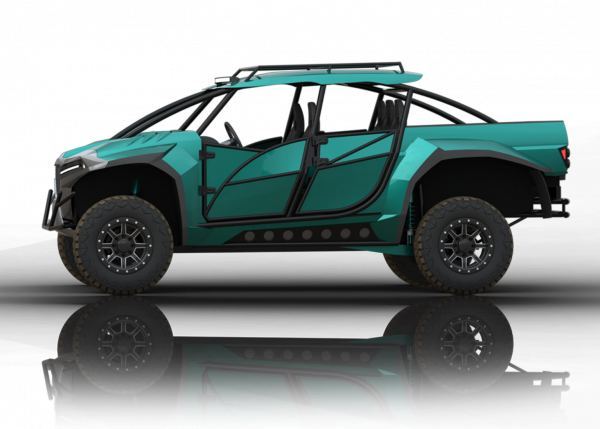 There is another electric vehicle manufacture entering the side-by-side market, Volcon ePowersports. They’ve just announced that they have hit a $17.5 million of funding since their inception which will help expand production lines, staff and supply chain to meet their demand. Their two exciting new side-by-side vehicles the Stag and the Beast. Both vehicles can be charged anywhere with a regular household outlet or a Level 2 charger and both the Stag’s and the Beast’s electric powertrains are waterproof and can not only cross creeks and rivers but also can be driven fully submerged.

The Stag is considered the “work horse” of the electric pair however it still has plenty of everything sport and from early photos we can see that there is both a two seat and four seat configurations. Coming to market with some really impressive performance figures, Volcon is stating that the Stag will have 300 FT/LBS of torque, up to 225 HP, a max range of 150 miles and will have a top speed of 70 MPH. Ground clearance is set at 14” and the comfort of the ride comes from an adjustable Fox Factory suspension. The current availability of the Stag is set for early 2022.

The Beast is the second side-by-side that Volcon is set to release but don’t get too excited it will not be available until early 2023. Unlike the Stag, the Beast is only available in a five seater version and honestly looks like it should only come in this trim as it looks more like a trophy truck for four. Simple said that when the Beats becomes available at dealerships there will be a line-up to purchase it, but it’s not just a good looking vehicle the performance is scary good. Volcon claims that as of now the Beast has 600 FT/LBS of torque and up to an astonishing 450 HP with a top speed of 80 MPH. It shares the same max range as the Stag of 150 miles and the ground clearance is slightly more than the Stag at 15” and features Fox Factory shocks with the optional Live Valve technology. Check them out online and drool a little at www.volcon.com