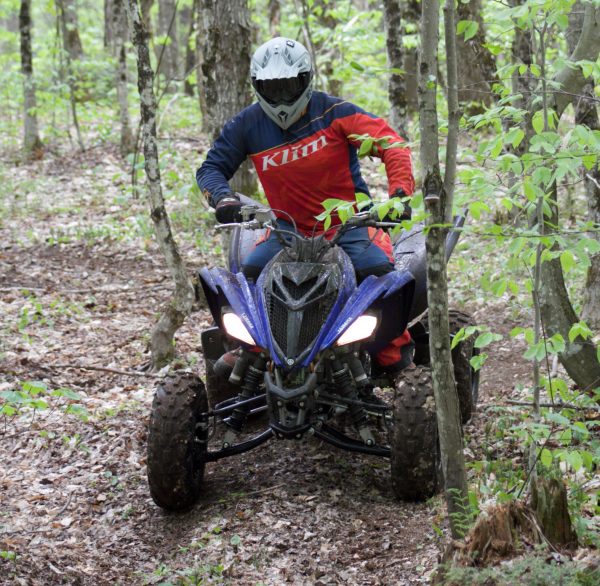 Yamaha’s Raptor is a throwback to a simpler time when trails were smoother, mud holes weren’t as deep, and friends were happy to lend a hand

We paused on the shoulder of a dirt road deep in the wilderness of Ontario and swapped machines. One of our testers, who’d not yet ridden a “sport” ATV like the Yamaha Raptor 700R, hopped aboard and squeezed the clutch lever like he’d never seen one before. After riding CVT-equipped ATVs, the idea of a clutch on a four-wheeler was, to him, beyond peculiar.

“Think of it like a 450 motocrosser,” said another tester who picked up on his hesitation. It was sage advice. With a U-shift-it transmission, two-wheel-drive (only), and a ship’s hold of horsepower, the Raptor is so unlike the ubiquitous ATVs that ply our fields and trails that the best way to think of it is as a four-wheeled motorcycle. Now that’s telling.

Channeling his experience as a motorcyclist, our tentative tester clicked the Raptor into gear, let out the clutch, and then, with a thumb-full of throttle, exploded down the logging road like he’d been catapulted into the future. And while it was as exhilarating as you’d expect, it wasn’t terrifying in the least. That’s how good the Raptor is.

Introduced in 2006 (as the Raptor 660), the Raptor is one of those rare vehicles that falls into the category of if it ain’t broke, don’t fix it. Very few vehicles gain this hallowed status. Yamaha—speaking of motorcycles—did it with its V-Max, which was produced essentially unchanged from 1985 to 2007. With the marketplace’s hunger for new products, and with manufacturers willing to do whatever’s necessary to separate us from our dollars, for a vehicle to last this long requires that it have particular—some might say peculiar—merits.

For anything to have lasting success it must be good. Irrespective of how much a manufacturer spends on advertising and promotion, if it’s a dud, it’s game over once the word gets out. Additionally, what survives are those products that find a marketplace niche that isn’t so heavy trafficked with competitors. Such was the case with the Yamaha V-Max motorcycle, which was a V-4 powered muscle-bike that didn’t look, feel, or sound like anything else. The V-Max may have had limited market share, but it was without competition. If you wanted one, you couldn’t buy the Honda or Suzuki equivalent—because equivalents didn’t exist.

Ditto for the Raptor. It’s the best-selling and the worst-selling sport ATV in the marketplace—because it’s the only pure-sport ATV in the marketplace. What qualifies an ATV as pure-sport? Firstly, it shouldn’t make any concessions to practicality. Four-wheel drive? You must be kidding. If the point of a sport ATV is light weight and the ability to bomb sand dunes and surf fire roads like a dirt-track racer, then why on earth would you need the additional weight, complexity, and cost of 4WD?

It cannot be overstated how different the Raptor is from commonplace ATVs. With 232 mm of front and 257 mm of rear suspension travel (courtesy KYB piggyback shocks adjustable for spring preload and high- and low-speed compression damping), the Raptor has a dual A-arm front suspension and a motorcycle-style rear swingarm with straight axle. And although Yamaha uses the word “plush” to describe the suspension, comparing the ride quality of the Raptor to a conventional ATV is like comparing the ride of a Saturday night stock car to an F150.

Whereas the balloon tires of most ATVs float over imperfections, the 22×7-10 front and 20×10-9 rear Maxxis tires (mounted on aluminum rims) on the Raptor sacrifice comfort for trail feedback. Indeed, whereas the CVT transmission, 4WD, and supple suspension that we take for granted on today’s ATVs make little work of mud bogs and rocky climbs, the Raptor demands something of the rider that every other ATV doesn’t: skill. But don’t be deterred, the payoff is immense.

The downside of an easy-peasy ATV is that they’re as responsive as riding a slice of orange floating in Jell-O. You know, the orange that jiggles and wiggles when someone bumps into the banquet table? Not so with the Raptor. On a fast section of winding dirt road, which would leave most every other ATV seeming wobbly and top-heavy, the Raptor moves with a light-footedness that’s as impressive as it is hard to comprehend.

Into the corner a little hot? No problem, just dip your shoulder into the direction you want to turn, lean forward a little, and add throttle. Bingo. A beautiful power slide and a tightened line. Much of the credit for the Raptor’s surfability (no, it’s not a word, but it should be) goes to the 686 cc, single-overhead-cam, four-valve, single-cylinder engine and five-speed transmission. With a 102 mm bore and 84 mm stroke, the engine loves to rev, to a heady 9,000 rpm, lofty territory for a big single. Once-upon-a-time big singles were hobbled by numbing vibration, but credit the dual counterbalancers for making the Raptor’s power-plant commendably smooth. And just because it revs-up-fast doesn’t mean the engine is peaky like an old two-stroke. Far from it. Work the throttle like an infinitely variable rheostat and just dial up the power you need—it never disappoints.

But before you run down to Yamaha and trade in your existing 4WD ATV, be aware that there are situations where the Raptor is, well, challenging. (You may remember reading a few paragraphs ago that skill was mentioned as a useful prerequisite.) On a tight, muddy, root-y, mosquito-y trail that wrapped around a lake, the Raptor, in the hands of an immensely capable rider, was a handful. Whereas his fellow riders on traditional ATVs bounced over obstacles and plowed through mud, our trail-warrior skittered and slammed and wheelied like he was auditioning for the Nitro Circus stunt show. And when he got stuck, he was as helpless as a turtle on its back. Why didn’t he hook up the winch and just pull himself out, you ask? It’s not that simple.

It must be noted that the Raptor’s tendency to get stuck on gnarly trails can’t be entirely blamed on its lack of 4WD. While engine ground clearance is an acceptable 9.4-inches, the centrally-mounted rear disc brake is just 4.4-inches from the ground. That may sound impressively high to a Civic Type-R owner who’s modified his ride so his wheels tuck into his wheel-wells, but for an off-roader four-and-a-half inches is roughly equivalent to the thickness of a sheet of paper.

Let’s backup. An ATV getting stuck? The acronym ATV stands, after all, for All Terrain Vehicle. Perhaps we need to rethink the Raptor. Maybe, instead of calling it a sport ATV, we should call it an MTV, not as in the (does-it-still-exist?) Music TV network, but as in a Most Terrain Vehicle, not all. And that winch? It doesn’t have one. And you can’t order one from Yamaha, either. But you should order, from Yamaha’s accessory catalogue, the following: the $173.95 rear grab bar and the $275.95 front grab bar, because if you’re on your own, or only associate with others who ride Raptors, you’re going to have to bull it out of the mud with brute force.

At least the Raptor is light, so you’ll likely make it out of the woods before the mosquitos finish you off for good. At 191 kg—that’s a case of beer above 400 pounds—the Raptor can be budged from just about anywhere if you’re not upset by the thought of mud on your boots and, well, mud everywhere else, too. (Or, you can do what we did—stick with friends who have powerful winches.)

And that neophyte sport ATV rider—the one mentioned earlier who’d never encountered a clutch lever on a four-wheeler—how did he do? Fine. Mostly. Until that climb with the roots and the rocks that didn’t allow a good run at it because it began in a stream. His first attempt was going well, then he stalled it. (At least the Raptor can be started in any gear.) His second attempt was fine until he hit a root, then a rock, and then lost his nerve and slid down the hill backwards. And then one of the other testers had to ride it up the hill for him. It’s not something that’s talked about around the office. At least not when he’s around.

Lest you think we’ve painted a picture that the Raptor isn’t for you, think again. Yes, it has noteworthy shortcomings. But depending on how you ride and where you ride, it could just be for you. And at $11,799 it’s a screaming bargain. Not yet convinced? It comes with reverse. Still not convinced? According to Yamaha’s website at the time of our test, 24-months of financing can be had at a paltry 1.99%. That’s a good deal on a great machine—even you need to keep your friends close to you.