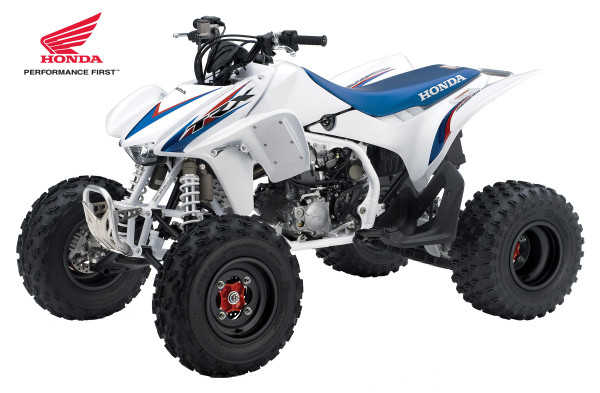 The Honda TRX 450R is one of the most prevalent sport quads around. The TRX 450R was released in 2004 as a kick-start only, high performance four stroke replacement for the age-old TRX 250R two stroke. The model was unchanged for 2005, and then received a new generation updated motor with more power and electric start. The 2006-2013 TRX450ER models are electric start only and there is a limited production, kick-start only version TRX450R that is popular, mostly with the racer types.

While the kick-start version is available, 95 percent of the late model TRXs floating around are electric start only. While this is definitely the most desirable option, there are a lot of us that would appreciate the security of a back up starting system. The TRX electric starter has a hard enough time starting the stock 12:1 450R motor, and anyone that has added a higher compression piston knows that it only adds to the load on the little TRX battery.

Honda does not offer the TRX with a kicker and electric starter together, nor do they actually sell a kit to add the kicker to an electric model. However, if you purchase a list of OEM Honda parts, it is possible to add a kick-starter to your electric start model, and the best part is that both starting methods work at the same time. Racers have perfected their dead engine start methods by learning to use both the kicker and electric starter to spin the motor even faster for improved starting, or the average rider can benefit from not having to worry about a dead battery leaving you stranded.

Starting with a clean machine, drain the transmission side oil and coolant. The transmission oil is drained from the drain bolt located under the shift shaft. This takes a 12mm socket, extension, and ratchet. The coolant can be drained via the 8mm head bolt at the bottom of water pump cover. Be sure to remove the radiator cap to release pressure and all fluid.

Lay out all necessary parts on a clean work area. Remove brake pedal pivot bolt and spring, then swing the pedal out of way. With a towel or large rag under the machine, remove water pump cover and swing it out of the way. Then remove the large clutch cover; you can lay out all the bolts you remove in order to speed up re-installation.

Remove 10mm head clutch spring tension bolts and springs, and remove pressure plate to access the large (27mm) center clutch nut. Leave clutch pack in for tension to remove this nut. You will have to open up the safety bend washer with a flat head screwdriver or chisel, and then remove nut with an impact wrench. You can apply pressure to the clutch pack with a rag to hold clutch from spinning.  With large nut removed, remove entire clutch system, keeping all pieces in order.

Install both shaft pivot bearings. One will install in clutch cover and the other will go into the back of the case. Freezing bearings in the freezer first and a light coat of grease will help installation. It should only take a very, very light tap with a small hammer to seat bearings. They should sit flush and square. Install the kick-starter stop plate with red Loctite on the two 6mm bolts.

Install the collar spacer and drive gear that goes behind the clutch basket. With spacer and gear in place, install the retaining bracket with the one 8mm head bolt. Be sure to use at least blue Loctite with all the bolts you are adding to the motor.

Re-install the clutch assembly. After installing basket, install the clutch fibers and steels so that you can use the rag against the fibers again to hold the shaft from spinning while tightening. Once the big 27mm nut is tight, you can use channel lock pliers to bend the tab washer against the nut, securing it to the shaft. This bend lock washer can be reused once or twice, but it is best practice to just replace it every time you remove it. Torque the clutch spying tension bolts in a star pattern for even pressure.

Assemble kick-start shaft with gear, collars, spacer, and springs. Pay attention to the two timing marks on stopper gear and shaft. They must be properly aligned for smooth operation. You can refer to an online parts fiche, or device manual for the proper order when assembling the shafts.

Install kick-start stopper plate behind where the kick-start assembly will sit; use Loctite on both these bolts as well. Install kick-starter shaft assembly into the engine case. With the shaft in place, use your finger or needle nose pliers to load the spring tension and place the tip into the case recess.

Install washers on both sides of kick-start drive gear shaft. Align the gears and mesh the teeth with the gear you installed behind the clutch basket as you install the drive gear assembly into the side case bearing that you installed in step four.