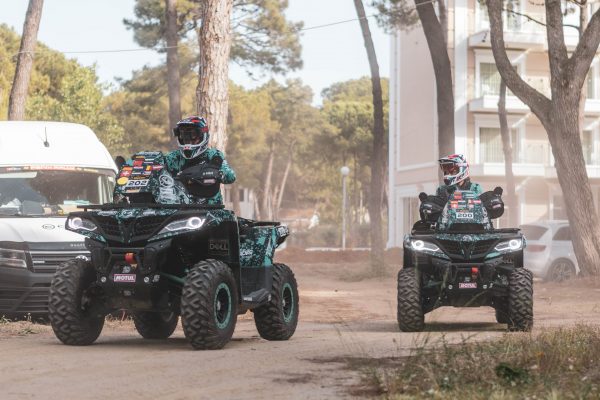 With just one week to go before the much-anticipated Rally Andalucía, the organisers had to cancel it due to the extremely high risk of fires, but CFMOTO Thunder Racing Team made an instant decision to start the Rally Albania and are already setting a fast pace there. The first day of racing on Sunday provided a full range of experiences for the participants and reminded them that racing in the mountains is an incredible challenge.

On Sunday, the athletes had 358 kilometres to cover, 240 of which were speed sections. While this may seem like an average day in Dakar Rally terms, the athletes pointed out that even the liaisons between the bivouac and the start/finish are on mountain roads, which also require concentration and fatigue.

Snow and heat on the same day

Antanas Kanopkinas, who won in last year’s Rally Albania quad category, said after the first day that he had already had some adventures: “I got a bit lost in one place, so I rode an extra ten kilometres. In the mountains you shouldcalculate distances differently, so it’s a lot, but the most important thing is that we reached the finish, and Albania gave us everything on the first day.”

The athlete said that he had to ride over a wide range of surfaces, from asphalt and gravel to large rocks and crushed stone. There were also extremely different natural elements, such as rain and snow and 35 degree heat.

“It was a tough first day, but it’s time to recover in the evening, go to bed early and start fighting again tomorrow,” summed up A. Kanopkinas on Sunday. The racer is third in the quad standings after day one.

Another CFMOTO Thunder Racing Team rider, Adomas Gančierius, who is second in the quad standings after the first day, also said that the day was not easy.

“The first day was, I would say, hell in paradise. It’s a paradise because of the scenery, but because of the heat it’s a real hell. It was already over thirty degrees at six in the morning, and in the mountains there is no wind in someplaces, so it feels like there is no oxygen at all. It’s very exhausting,” said A. Gančierius.

The quad rider said that despite the challenges by nature itself, the day was fun and without any losses or breakdowns. There was one minor navigational error, but this did not prevent the second place.

On Monday, the riders will start and finish in the same bivouac on a 190-kilometre looping stage. The route for the second day of the race will take in the northern part of Albania, near the borders of Montenegro and Serbia.

On Monday, the second day of the Rally Albania took place in the mountains of northern Albania. The CFMOTO Thunder Racing Team riders, who started on Sunday and immediately climbed to the top of the results table in their class, say that the second day was much shorter, but certainly not easy.

After covering almost 300 speed stage kilometres on Sunday, the riders had to have a much shorter day on Monday, according to the plan. However, due to the fact that two meters of the snow was covering top of the mountains and could not be cleared, the organisers had to shorten the already short route for the day, so the athletes had to cover around fifty speed stage kilometres. Although, as the athletes mentioned after the first day, it is important to bear in mind that in the Rally Albania, even the routes from the bivouac to the start and back from the finish require a great deal of concentration and strength – it is rare to drive on paved, straight roads here.

A short but busy day

“It was a very fun day, albeit a short one. We drove up to a place where we could reach and returned to the bivouac. The whole speed section was baja-like, so we had to go in pedal-to-the-metal mode for the whole distance, going uphill,” said Adomas Gančierius about Monday’s course, adding that the whole route offered incredible views of nature.

Antanas Kanopkinas, another CFMOTO Thunder Racing Team rider, said that even though it was a short day, it wasn’t an easy one: “It was just another working day, just a bit shorter. There are no easy days here, and the most important thing today is that I managed to stay on track and not have any problems neither with the equipment, nor the navigation – the finish was reached successfully.”

He added to his teammate and said that the views he had seen made up for all the hassle and worries associated with this rally.

“I’m very happy that we are in the top 10 overall with the bikes. Although we don’t know the exact results of the first day yet, all the penalties have not been taken into account yet, but we are tentatively in sixth and eighth place,” said the rider, who is also happy with the pace of the team.

In the quad standings alone, by the preliminary results after two days A. Kanopkinas is in first place and A. Gančierius – in second.

On Tuesday, the rally caravan will turn south and the participants will have to cover the second longest distance of the entire rally – 380 speed stage kilometres. The bivouac for one day will stand in the town of Progradec, located between two mountain chains, next to Lake Ohrid.