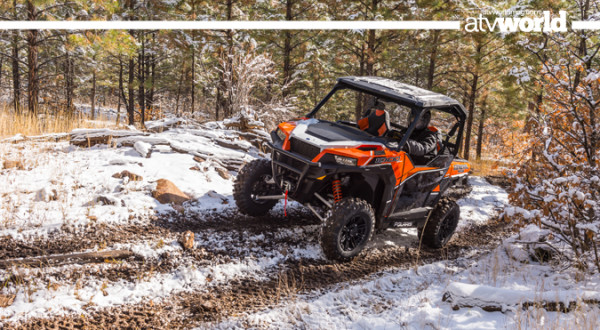 Just when you thought the Polaris off-road division had every possible conceivable niche’ of the side-by-side market covered – in marches the all-new General. This five star blend of hard working Ranger and high-performance RZR attributes represents the latest side-by-side from the global off-road giant, and Polaris is betting big that the General will become their new flagship model in the very near future.

Rolled out to the off-road media masses in mid-November in the mountainous and snow covered country of northern New Mexico, the crew at ATV World had the chance to learn first hand about the new model and ride the newest member of the Polaris family on the same day it was unveiled globally to enthusiasts online.

The General will occupy its own territory within the Polaris off-road category; meaning this isn’t a Ranger nor a RZR, (even though it shares many attributes with both) making it a standalone third brand of side-by-sides for the company. According to Polaris, the General will occupy a space for customers who are looking for a vehicle that is more trail friendly than the Ranger, but offers the ability to perform light to medium duty work, something the high-performance RZR is not well suited for. Polaris tells us that in developing the General, their end goal was to build a vehicle designed for 75% play and 25% work.

The hard numbers on the specification sheet tells the story quite nicely. Power is big, with a 100-horsepower ProStar 1,000cc twin-cylinder engine rumbling out back, producing plenty of torque and very good acceleration for a vehicle this large. Four-wheel independent suspension travel delivers 12.25-inches up front and just over 13-inches at the rear. With those big travel numbers comes an equally adept ground clearance of 12-inches unloaded, and a still respectable 7.4-inches when loaded.

Speaking of loaded…here is where the work side of things comes into play with the new General. A generously proportioned dump box is found at the rear, compete with gas assist and tailgate. With a payload rating of 600-pounds, there is more than enough carrying capacity to satisfy most users. The power and well-sprung suspension also allows the General to tow up to 1,500-pounds.

All three trim levels of the General come standard with contoured and form fitting half-doors. We loved the automotive style latches both inside and out, and when combined with the profile tubing of the over-structure, we experienced few rattles or squeaks. You can create a full-cab enclosure with accessory upper half doors that include slider windows.

But numbers and specifications aside, there’s plenty more that sets the General apart from both of its siblings. As you saunter up to the new vehicle, the first thing you’ll notice are the standard half-doors. By using profile tubing similar to the Ranger, Polaris engineers and designers crafted a half door that follows and accentuates the lines of the entire vehicle. The doors not only look good on the outside, but the inside touts a finished panel as well.

Open the doors and you’re greeted with twin bucket seats and a completely redesigned cab layout. There are the obligatory cup holders and catch trays, along with a center console storage with lid, as well as a new in-line shifter. Unlike the Ranger’s more upright and boxy feel, the General gives you far more comfort while still providing relatively easy access and exit to and from the cab; an important attribute for on the job duties.

Once seated, we found the cab to have excellent width, far more than the more tucked and low profile cockpit feel of a RZR. While you’ll find standard Polaris rocker switches for four-wheel drive actuation, (the General lacks an open rear differential option) and headlights, your eye will become instantly attracted to the new analog/digital gauge package. The big and bold gauge allows you to choose between two colors (red and blue) and it’s mounted directly to the tilt steering column, ensuring it stays perfectly centered within the upper steering wheel opening, no matter where you position the wheel.

One of our favorite features of the new General had to be the custom sewn seats. They are much wider than a RZR seat and far more comfortable. The driver seat comes standard with a seat slider adjustment.

There’s no mistaking the Polaris heritage with this vehicle either; the overall design cues and menacing front brow with LED headlights is distinctly Polaris…perhaps even to a fault. As the General attempts to stake out a truly unique space between its more popular siblings, looking like a me-too vehicle could hamper its ability to be recognized as its own machine.

According to Polaris Off-Road General Manager Tim Blinkhorn, who was on location for the big roll out, the General not only marks the introduction of a new category of side-by-sides for Polaris, but it could possibly have an impact on their other models as well. “The General stakes out a very clear territory between our hard working Ranger and the performance minded RZR,” said Blinkhorn. “In the future we could possibly push the boundaries further with those two vehicles (Ranger and RZR)…we could possibly look at ways to make the Ranger work harder, or the give the RZR even more performance minded attributes.”

While Tim wouldn’t divulge any more information on what the future might hold for other Polaris off-road vehicles, he was clearly excited about the General and its future potential.

For 2016, Polaris will offer the new vehicle in three different trim and accessory packages. The base model will feature mold-in color and all the above-mentioned features, as well as Variable Assist Electronic Power steering and standard 27” steel wheels. The next trim level up is the Premium Blue Velocity General, and as the name implies, this variation comes in a brilliant blue paint that is sprayed on versus molded-in and is complemented by matte black, cast aluminum wheels and standard Sport Low Profile Front Bumper and Polaris HD 4,500lb winch. Finally, the top dog in the General chain of command is the Deluxe version which further ups the accessory ante with standard Sport Poly Roof, MTX Premium 8-Speaker Soundbar, Convex Rear View Mirror and premium FOX Podium X 2.0 shocks with the new Quick Switch 3 compression adjustment system. The Deluxe General comes sprayed in sassy orange, black and white scheme.

After a day on the rocky and meandering trails in and around Carson National Forest, aboard both the Premium and Deluxe versions, (the base model is slated to hit dealerships in March of 2016) we were more than impressed with the vehicles nimble and sporty edge. While it lacks the sheer travel numbers and added punch of a RZR, we found the General to be more comfortable and better suited for trail riding than its high-performance brother. While we can’t give you first hand intel on the work capabilities of the General just yet, after just one ride, we’d have to say Polaris nailed the 75/25 play/work ratio they were after.

This General blends the line between work and play so well that this could very well be the top selling side-by-side in the Polaris arsenal in just a few short years. We hope to get more seat time with the General this spring, when we’ll have a long term test unit in our possession. Until then, here’s a look at the roll-out.

Unseasonable cool weather and an overnight coating of snow made the trails in norther New Mexico a bit more interesting early in the day. With the four-wheel driver button engaged, the General never missed a step.

Both the Premium and Deluxe versions come standard with a burly 4,500lb winch, perfect for trail ride retrieval or adding a plow system.

Unlike the Ranger, the General’s rear box is highly stylized, and in fact, the General as a whole is perhaps the best styled side-by-side in the Polaris stable. The vehicle has a distinct look that flows from headlight to taillight. An oversized gate latch makes dropping the gate easy, and opens up access to a spacious box that is ready to accept a wide range of Polaris accessories.

A completely redesigned cockpit and dash is a big part of the General’s appeal. Highlights include 23L of integrated storage, center console storage, and multiple 12-volt outlets, including one inside the console storage area. While there are still some rough edges with average fit and finish, we loved the new, in-your-face gauge design and the cab was both spacious and comfortable.

The Deluxe General touts the latest shock technology from FOX with their Quick Switch 3, easy to adjust compression design. A large dial gives you three simple settings – soft, medium and firm. We’ve experimented with these shocks on our snowmobiles a year ago and love their simple and effective operation.

Polaris is coming to market with the General fully-loaded with several accessories. An outfitted General was on hand with a complete cab system that included a heater system, windshield wiper, accessory lights and much more. Now this is going off-road in style! The top mounted sound bar comes standard in the Deluxe version and offers easy to use Bluetooth connectivity.