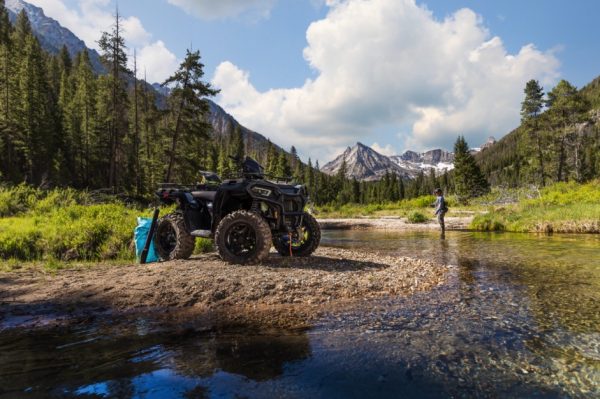 2021 was a banner year for off-roading. But Polaris knows a manufacturer sits on its hands at its peril

Easily one of the most bizarre aspects of an already bizarre pandemic year has been watching some businesses thrive and others dive. House builders and septic tank installers are going flat out, while restauranteurs and airlines are gasping for breath. But who could have guessed that anything to do with outdoor sports—from bicycles to paddleboards to powersports—have had a year for the ages. For mega-company Polaris, 2022 is a year to cement its pandemic-purchasers to the brand and to coax the undecided off the porch and into the saddle. And with updates and upgrades across the lineup, we present an overview of all that’s new from the fine state of Minnesota.

With a history stretching back more than two decades, the Ranger is a staple in the Polaris lineup. For ’22 the Ranger SP 570 ($13,399, all pricing in Canadian dollars) boasts a larger cargo box and in-cab storage and additional ground clearance—now at 11-inches. Because the world isn’t obligated to clear you a path, the Ranger has a modest 56-inch width and is powered by a 567 cc single that claims 44 horsepower.

Dumping that larger, 500-pound cargo box is a one-handed breeze, too, thanks to gas assist shocks. A two-inch receiver hitch facilitates a 1,500 pound towing capacity. Polaris claims legroom has been increased by two inches and the suspension (that boasts nine-inches of front travel and 10-inches of rear travel) has sealed bushes and bearings throughout, just in case things get muddy. And to ensure domestic harmony, the Ranger has something called the VersaTrac Turf Mode, which is a fancy way of saying that the rear differential can be unlocked so that when you’re working on your lawn you’re not shredding your lawn and creating more work.

If the Ranger is about finding life/work balance, Polaris’ RZR range is unabashedly hedonistic—it’s all about fun. The base model is the $13,399 RZR Trail 570, and one step up is the $16,499 RZR Trail (yes, it’s a little confusing to decipher Polaris’ model-naming nomenclature). Both models are 50-inches wide, which means you can negotiate narrow (as in ATV) trails without ripping mirrors or fenders off.

If you’ve got a bit more breathing room, the 60-inch-wide RZR Trail S could be the ticket. With three models that range in horsepower from 75 in the Trail S 900 ($18,999) to 100 horsepower in the Trail S 1000 ($22,199), you’ve got some choosing to do. Regardless of your choice, all RZR models have full doors (we like mud as much as the next guy—just not down our socks), a shade over 13 inches of suspension travel, revised adjustable seating, and a tilt steering wheel.

And, finally, we have a machine that makes us want to be in grade school again. The $6,899 RZR 200 EFI is a kid-friendly side-by-side that sports a 180 cc fuel-injected single. But don’t let its modest price or small engine fool you. This is a proper machine with all the features that today’s hovering parents demand. The 200’s speed can be governed by an app, a feature ensures that riders are wearing helmets, and geographical limits can be imposed so your kids don’t head down to the pool hall. (Kids: ask your parents what a pool hall is.) Polaris has thought of everything with this model. A tilt steering wheel belies the modest price-point and it even comes with a pair of helmets.

Halfway between the oh-so-sensible Ranger and the let-it-rip RZR models, the General hits the sweet spot for many enthusiasts. And leading the charge for ’22 in the General lineup is the Trailhead Edition. In either the two-seat, two-door $32,299 XP 1000 version or the bring-the-gang $35,999 four-seater, these do-it-all machines may be the stars of the Polaris lineup.

Built, according to Polaris, for those “looking to go further, in search of new destinations and experiences, the XP 1000 is for longer, more adventurous hauls with riders and all their gear.”

And Polaris’ words aren’t just hollow ad copy. The XP’s Ride Command seven-inch glove-touch “infotainment” system allows riders in a group to follow a predetermined route even if they’re outside cell range. A follow-the-leader feature allows a designated rider to leave a “digital track” for everyone to follow to the destination. Another sweet feature is the capability to send texts within the group without cell service.

Just because side-by-sides are getting all the press it doesn’t mean the ATV is dead. Not if Polaris has anything to say about it. From kids’ machines to mud-hole-mastering 1000s, the Sportsman range is deep and wide.

Sometimes technology can be more unwelcome intrusion than helpful companion, but Ride Command promises to be the latter. (If you’ve ever tried riding with a cell phone between your knees to help you navigate, you know what we mean.) Now you can let members of your group know the route as well as exchange texts to update everyone in case of the unexpected. And you’re not reliant on cell phone service, either.

Useful features on this upscale pair are three-position-adjustable electronic power steering, LED lighting, and front and rear arched A-arms for more generous ground clearance. Meaty 26-tires adorn the 570 (the 1000s are 27-inch) and aluminum wheels are standard. Powering the 570 is Polaris’ tested-and-true 44 horsepower single while the 1000 has a 952 cc twin with a muscular 90 horsepower.

That’s not all, folks

Polaris makes an astounding number of side-by-side and ATV models, and our preview of its 2022 offerings focused on what’s new and notable. As far as trends go, we see the continuation of the side-by-side revolution, while ATVs will continue to have their adherents. At ATV World we don’t choose one over the other. As long as we’re outside and away from our desks, we’re happy to ride whatever comes our way.