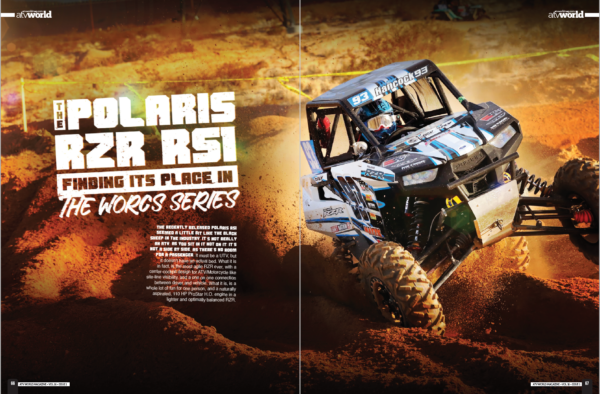 The recently released Polaris RS1 seemed a little bit like the Black Sheep in the industry. It’s not really an ATV, as you sit in it not on it; it’s not a side by side, as there’s no room for a passenger. It must be a UTV, but it doesn’t have an actual bed. What it is in fact, is the most agile RZR ever, with a center-cockpit design for ATV/Motorcycle like site-line visibility, and a one on one connection between driver and vehicle. What it is, is a whole lot of fun for one person, and a naturally aspirated, 110 HP ProStar H.O. engine in a lighter and optimally balanced RZR.

So just where does this $18,000, single person UTV fit into this current market? This was the question, and the immediate answer appears to be on the race track. Just as expected, the first place the RS1 started showing up, and making a name for itself is in closed course competition. One particular racing venue where the RS1 is quickly proving itself is the WORCS Series. WORCS races are typically run without a passenger anyways, and the RS1 brings both a weight and agilility.

Coinciding with the RS1’s release in 2018, Ronnie Anderson pulled off a win in both WORCS UTV Pro Classes at the opener – talk about coming out swinging! In the competition’s defense, this was the super tight, almost arena-cross-like round that takes place in a Las Vegas Casino. Nevertheless, many racers took note, and the SXS Pro Stock class saw a huge influx of RS1s throughout the season.

In 2019, the single seat RS1 appears to be the favorite choice amongst top drivers in the SXS Pro Stock Class. The SXS Pro Stock class consists of naturally aspirated cars with no internal engine mods. Racers can only add exhaust, clutching, and EFI mapping to improve the way it runs. These are the same rules the two seat machines must abide by, but the RS1 is lighter, better balanced, and more agile. With its considerably shorter wheelbase, the RS1 will run circles around a standard UTV in a tight course, but on the same note, can also be a little bit squirrelly and harder to control in the whoops and higher speed sections.

Ronnie Anderson, Matt Hancock, and Beau Baron went 1, 2, and 3 in their RS1 race cars at the WORCS opener in Primm, NV. In a class that was previously only contested by two seat Side by Sides, they didn’t even let a single one on the box with them. This was a huge statement towards domination for the RS1, and now with five rounds behind us, they’re still dominating. A few conventional Side by Sides have found their way in the mix, but there are 4-5 guys on RS1s proving they can hit the podium, or even win at any time.

It’s pretty wild to see this new machine pretty much dominating this class, but it’s even crazier that they are all pretty much running the same, exact set-up. Known for his race developed RZR suspension and chassis components, Mark Holz of Holz Racing Products has pretty much built each one of these guys the same car. Beau Baron, Ronnie Anderson, Matt Hancock, Corbin Leaverton, and Cody Bradbury are all winning races in HOLZ Racing built RS1s and it’s pretty safe to say he’s got them figured out.

The great thing about this stock class and RS1 platform is that everything the top guys are winning on is available to the public for a price. For $11,560, the HOLZ RS1 short course kit comes with everything you really need to convert your showroom stock RS1 into a race machine that’s ready compete with the top pros.

The HRP Suspension components are made from tig-welded, 4130 chromoly for substantial weight savings and incredible durability. The HRP RS1 still retains the same 64” track width and stock shock lengths, but the front A-arms add two inches to the overall wheelbase to improve handling. This kit includes everything you need for safety, handling, and durability. For the SxS Pro Stock class, all that’s left for the individual racer to choose is wheels; tires; shocks; exhaust; fuel mapping and clutching.

Beau Baron and Matt Hancock both opt to run ELKA’s new 3.0” Stage 5 Shocks. Beau and Matt are both longtime Elka Suspension guys, and have been working with Roll Design’s Doug Roll to perfect valving, overall performance and handling. The 3.0” platform is the latest evolution of the Stage 5 that was necessary to extract every last bit of performance, cooling, and adjustability on these bigger, longer travel machines like the RS1, RZR XP, and Can Am X3. They feature massive 66mm aluminum bodies with Elka’s proven High-Flow technology, with dual-speed compression and rebound adjust-ability. They also feature dual-rate springs with threaded/adjustable crossover rings and 22mm induction-hardened steel shafts.

Beau and Matt also turn to the same man when it comes to making their ATVs and Side by Sides run to their fullest potential. Tuner/builder Curtis Sparks is that guy, and he’s been making four-stroke engines rip since the Honda ATC 90 days. The Pro Stock class doesn’t allow you to open or modify the engine in any way, but you can modify exhaust, fuel programming, and clutching. Beau and Matt both run the stainless steel X6 Sparks Racing exhaust with custom tuning by Sparks via the new Dynojet Power Commander

Beau Baron is a CST Tire Racer and Test rider for motorcycles, ATVs and Side by Sides. He chooses to run the CST Dingo for hard-pack terrain and the CST Stag for muddy, sandy, or loamy conditions. His tire size changes between 28”, 29”, and 30”, depending on track conditions, but they are always mounted on 14×7 DWT Rock & Lock wheels. The Rock & Lock wheels are spun aluminum construction versus cast, this means they will bend versus breaking under extreme impact. This option is key for Beau as he runs the Tire Block run flat system, which won’t allow him to get a flat, even with an extremely bent wheel.

Matt Hancock runs lightweight Maxxis Bighorn 2.0’s on 14×7 Method bead-lock wheels. He also runs the Tire Block run flat system, eliminating any chance of a flat induced DNF, or even pitstop. Bradbury and Leaverton run KMC bead-locks and GBC Kanati tires with Tire Blocks keeping them round and rolling. Ronnie Anderson is the only one of these guys not running a run-flat system, yet his BFG tires and Walker Evans bead-locks seem to be proving pretty bulletproof.

The RS1 features drive train items borrowed from the higher powered XP Turbo S, which should in theory, hold up tremendously with a 110 HP, lighter car. The front diff is way bigger/better than what’s found on the other naturally aspirated RZRs, and so are the drive shafts and CV axles. Beau and Ronnie seem to be having pretty good luck with the stock Polaris CV axles, while Matt, Corbin, and Cody are all running ultra-tough 300M RCV Pro Series II Axles.

Ronnie Anderson managed to win both the Pro Stock and SXS Pro in the RS1 in Vegas last year, but it’s definitely a little down on power for most tracks in the SXS Pro (Turbo) class. Beau Baron decided to take it one step further for 2019, committing to the RS1 for the entire series in SXS Pro. Claiming to prefer the RS1 on many of the tracks, he turned to Curtis at Sparks Racing to build a full-on, no holds barred race motor to compete with the Turbos.

The engine is pretty much an N/A RZR, so Sparks was more than familiar with what it takes to extract tons of power from it. Starting at the core, they built a high performance crank with custom rods, and topped that with high compression Sparks Racing CP Pistons. The head gets a valve job with custom valves, head porting, and camshafts. With the N/A RS1 engine making as much HP as a Turbo car, they then had to figure out clutching and hit the track.

Beau’s Sparks-built RS1 is every bit competitive enough to win the SXS Pro (Turbo) class, but he just hasn’t had the best of luck in it yet. The inaugural race was Rd. 1 in Primm, where he was chasing down the physical leaders and got completely taken out by a lapper. The car was nearly totaled, and he was pretty banged up as well. Needless to say, a DNF led to lots of time, work and money in the garage to be back for round 2 in Havasu. Starting deep in the third row after his DNF from Primm, Beau worked his way to an incredible 2nd place finish in the Turbo class behind Cody Bradbury. Round 3 was Peoria, AZ where Matt Hancock won his first Turbo Class race in his Kraftwerks Super Charged RZR XP. Beau ended up 4th by less than one second on adjusted time, after a great battle with the Miller Brothers in their X3s. Round 4/5 was in Vegas, and a part failure caused him a second, dreaded DNF for the season.

The next round is Mesquite, NV, and we can’t wait to see him land this thing on top of the box. The speed, handling, desire, and ability is definitely there, it’s just time for a little better luck!