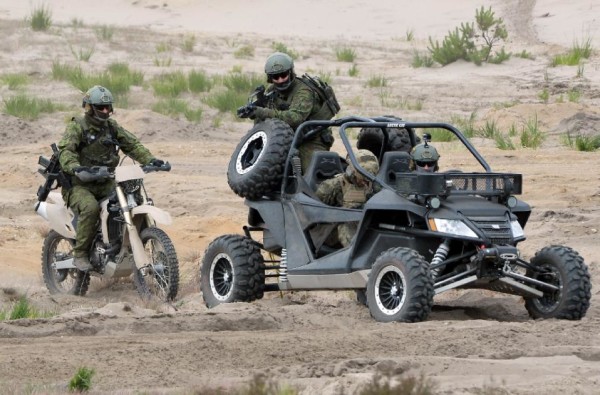 Both John Deere and Polaris have proven the military business when it comes to our beloved off-road vehicles can and is big business for a manufacturer. Now we have photographic proof that our pals at Arctic Cat are very much in the off-road military game as well.

This past June, approximately 2,100 soldiers from Belgium, the Czech Republic, Germany, Hungary, Lithuania, the Netherlands, Norway, Poland and the United States took part in NATO train exercises in light of the escalating tensions between European nations and the Russia due to the conflict in Ukraine.

The report and photograph came from the Agency France Press organization, an agency similar to the United States Associated Press. While we won’t go into the political details, the photos clearly shows an Arctic Cat Wildcat in use as combat forces went through training exercises in the desert. With a top speed in excess of 70mph and the ability to fly over gnarly terrain, we’d call it advantage NATO when it comes to getting somewhere fast across the desert terrain.