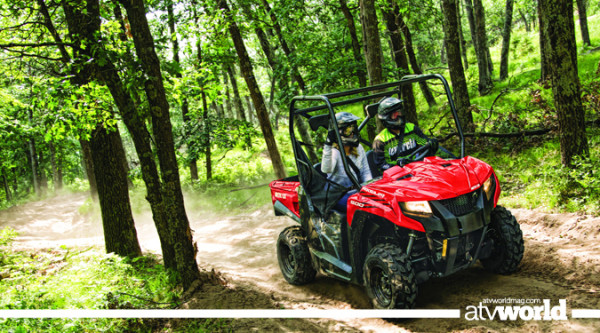 offerings over the course of a model year, allowing enthusiasts to “soak-in” all the changes, one appetizing bite at a time. Arctic Cat has gotten the “slow” release program down to virtually a science, and when the calendar year turned to 2016, we eagerly awaited by our computer monitors to see what the Thief River Falls maker had up its sleeve for the coming year.

Right on cue, our inbox lit up with a smattering of new vehicles and special edition models that had those of us in the snowbelt hoping the melting rays of the spring fired sun would get here just a bit sooner. Here’s a look.

Leading the charge is the new HDX 700 XT Crew. With two rows of bench seating, the new Crew can seat up to six people, meaning you can share the off-road with more of you buddies or your entire family. The rear cargo box transforms like most in the Cat lineup and has a beefy capacity of 1000-pounds. With all the same suspension goodies we’ve come to expect with the HDX, the new crew is dipped in three variations including Fire Red, Timber Camo and traditional Arctic Cat Green

The other big bit of newness in the mid-season release also allows you to share the off-road experience, but this time with the Arctic Cat Alterra ATV in TRV form. Cat was one of the first to come up with the two-up ATV concept and over the years they have nearly perfected it with lots of comfort for the driver and passenger built-in to the high-luxury seating configuration. Like other Cat quads, you’ll find the adaptable SpeedRack II system on both ends and you can choose to outfit your Alterra TRV with power steering for even more comfort and control. Power comes in your choice of 1000, 700, 550, and 500 engines and a wide range of colors.

With the side-by-side marketing continuing to expand at a rapid pace, Cat has come to market with a smaller and more affordable in the category with a new Prowler 500. The sized-right vehicle is just over 100-inches in length and features a narrow and nimble width of just over 56-inches. While the 500-engine may seem small by some of today’s much bigger machines, this one packs a punch with the ability to tow up to 1,500-pounds and carry up to 500-pounds in the rear box. Work or play, this one should have you covered.

On the special edition front, the big, burly and mud-potent Mudpro 1000 is back in a Special Edition version that features a Warn Winch, 280-inch Maxxis Zilla Tires, lots of heavy-duty bumper protection at the front and rear and of course special edition graphics to set you apart when you’re not tank deep in the muck.

Cat also has something for the avid outdoorsman with an all new blaze orange and camo combo graphic that can be applied to a wide range of models including the TBX, HDX and Wildcat Trail.

Finally we can’t forget about the kids and neither has Arctic Cat with new 2016 Alterra 90. It looks just like its bigger brethren and delivers performance and safety in a package that is sized right for kids.