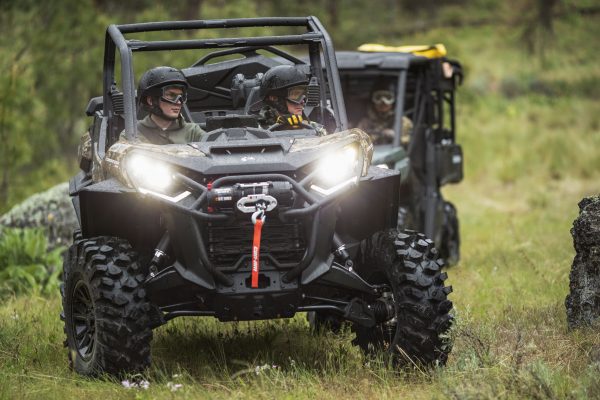 How good has the past year been to BRP’s ATV and side-by-side division? How about a 41 percent increase in 2021 Q1 sales? And, most encouragingly from the prospect of building a sustainable industry, a full 37 percent of those sales were to new riders. While there may well be a post-pandemic letdown, 2021, at the very least, has given the off-road industry the opportunity to get more butts into more seats. But manufacturers realize that as great as the opportunity is, we may never see another year quite like it. Which makes it more important than ever for your brand to rise to the top—and BRP, with an astounding number of machines in every imaginable category, is going all out to become your brand of choice.

For the Maverick X3, 2022 brings, according to BRP, “refinement” to the unabashedly performance-oriented machine. Because you can never have too much power, the paltry 195 horsepower of last year’s three-cylinder turbocharged engine has been upped by five to an even 200. But, let’s face it, few of us would be able to tell the difference between 195 and 200 horsepower—unless, of course, that engine is mated to a new primary clutch BRP touts as a game changer.

The pDrive primary clutch uses rollers instead of sliders in its design, which, says BRP, reduces backlash for better performance, greater reliability, and lower noise. Whereas competitor’s clutches require cleaning and inspection every 50 hours or 800 km, pDrive extends maintenance intervals to 100 hours or 3,000 km. And the claim of faster upshifting and back-shifting should be a boon when you need immediate power to the ground.

On top of (a smidge) more power and the promise of more precise clutching, select X3 models can be fitted with 10-inch-wide 30- or 32-inch eight-ply Maxxis Carnivore tires. And because clutching is all, turbo RR engines have a temperature gauge that monitors ambient air temperature in the CVT enclosure. While we’re on the topic of drivetrain, DS, RS turbo, and turbo RR models receive the smart-loc front differential, which will allow you to drive your way out of any predicament short of an overnight stay in Alcatraz.

Other Maverick X3 changes are geared toward durability. Some X3 models receive more robust front lower a-arms and thicker material in the rear suspension lower link, in addition to a rear toe plate that’s more than twice as thick as before. And because the most important piece of equipment on any side-by-side is the roll cage, tubing thickness has increased nearly 30 percent (ditto for the chassis material, too) for reduced flex and a claimed 13 percent increase in torsional rigidity.

Another understated gem in the Maverick range is the Trail. At a svelte 50 inches wide, the Maverick Trail excels when the going gets tight. Tired of making three-point (or more) turns because your side-by-side is too wide to comfortably navigate narrow ATV trails? This could be your machine.

Powered by the new HD7 engine (read all about it below), the Trail is also moderately priced. At $14,399 for the base model and $16,799 for the Maverick Trail DPS, with the primary benefit being the fitment of power steering, it’s a machine that makes a lot of sense if you live in a region with ATV trials but limited side-by-side trails. And you can even get it in a 75 horsepower V-twin variant if you’re really in a hurry.

BRP’s new HD9 and HD7 ACE engines highlight 2022 revisions within the Defender range of workhorse side-by-sides. The 976 cc V-twin HD9 has the most horsepower (65) and torque (60 lb-ft) in its category and more get-up-and-go, claims BRP, than either the Polaris Ranger 1000 or the 812 cc Kawasaki Pro FXR.

It’s heartening to see technology like the new pDrive primary clutch immediately trickle down to machines in the lineup that more of us, more often than not, actually buy. The 650 cc single-cylinder HD7 ACE engine claims 52 horsepower, has throttle-by-wire, standard engine braking and turf mode (save that lawn!) and lowered noise and vibration levels vs. the outgoing HD5 engine. At a claimed 52 horsepower the HD7 ACE positively wallops the 38 horsepower of the old HD5 engine and has five horsepower more than Yamaha’s marginally larger (686 cc) Viking model, claim BRP.

Perhaps the most stunning aspect of the Defender range is the sheer breadth of the lineup. While it’s true that the Defender range shares one of three engines (the HD7, the HD9, or the 82 horsepower HD10) the range has an astonishing 18 models. From the base $13,499 Defender on up through the $35,299 Defender Max Limited, the possibilities—especially once you start ticking the option boxes—is virtually endless.

The Defender range exemplifies the changing landscape of the marketplace. Once upon a time, a base-model side-by-side (and before that, a base model ATV) was a relatively simple, crude machine that sounded—and drove—like a lawn tractor. But the past five years have seen a huge jump in both machine capability and sophistication. The base Defender is no less sophisticated than a modern base pickup. It may not have the bells and whistles of the top-of-the-line model, but it’s no less a machine because of it.

Conversely, high-end Defender models show how far we’ve come. The $31,799 Defender Limited, $35,299 Defender Max Limited, and the $34,199 Defender Pro Limited have fully enclosed cabins with heating and air conditioning. While it may seem unnecessary to some, 100 years ago, when the automobile ditched half doors and soft tops for a fully enclosed cabin people said the same thing. Few today would suggest we go back to the car as it once was.

To claim the Commander competes in a crowded market segment is a gross understatement. Half-play and half-work, the Commander is a machine that can be justified with the head and the heart. And because the head demands practicality, BRP has the facts and figures to convince you the Commander will be a trusty, undemanding companion for years to come.

BRP created a chart where they chronicled the cost of maintenance over a five-year period. According to BRP, a Commander 700 requires significantly less preventative maintenance than competing machines. How much less? Half as much, says BRP. And because off-road machines lead a tortured life, BRP has gone to great lengths to ensure the Commander’s design doesn’t get in the way of keeping it running. The cargo box easily flips out of the way and access to the airbox, radiator, oil filler, CVT, and battery is quick and painless. Are you a procrastinator when it comes to cleaning your air filter? No more. The Commander’s can be accessed by one quarter-turn screw.

The range starts at the Commander 700 DPS (from $16,699) and progresses to the Commander 700 XT (from $18,899). Both are powered by the HD7 ACE engine and the XT adds painted bodywork (vs. color-in construction on the DPS), bigger tires on aluminum wheels, a winch, a roof, and a considerably larger digital display than what you get on the DPS.

Looking the business in “mossy oak break-up country camo” paintwork (the perfect title, incidentally, for a country song) the new Commander X mr 1000R (from $25,899) is BRP’s ultimate tool to get you into the woods for your next hunting adventure. Deeply treaded thirty-inch “swamp force” tires on 14-inch aluminum wheels more than hint at the R’s capability, as do mudguard extensions and LED headlights. And if you’ve ever had to fish underwater to find your winch when you’re buried in mud, you’ll particularly appreciate the high-mount winch which is nearly at headlight level. The R also sports less obvious details that, nevertheless, are vitally important when the going gets miserable. Arched a-arms on the front suspension aid ground clearance and both the exhaust routing and the air intake to the CVT have been re-routed to lower operating temperatures.

And if you’re one who believes two’s a crowd but four’s half the number you need to square dance, then the four-door Commander MAX XT-P 1000R ($30,799) could be the ticket. The focus shifts slightly from the deep-woods capability of the Commander X mr 1000R to trail performance, but the componentry remains top notch, with a roof, LED lighting, a winch, and Fox Podium QS3 30-inch tires on 15-inch aluminum wheels as standard.

With so many models in its 2022 lineup, the Can-Am faithful will be challenged to find the machine that best suits their needs, wants, and budget. Hopefully, we’ve given you a leg up.