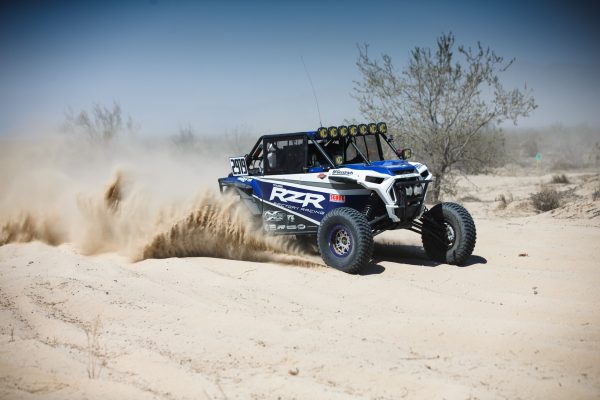 “We are really excited to showcase why the RZR platform is the best option for racers across all classes,” said Brett Carpenter, Manager of RZR Factory Racing. “Our team came here to make a statement this weekend, and that’s what they did. We started off the SCORE championship on a good note for this year, and we intend to keep that momentum rolling for the Baja 500, in June.”

Starting 29th, Cayden MacCachren came off of the starting line in the Pro UTV Forced Induction class, driving the #2919 RZR Turbo S machine of Jagged X Racing. MacCachren joined forces with Brandon Schueler and the Jagged X team in an effort to conquer Baja for the 2021 season. The Jagged X team made quick work of the field with MacCachren behind the wheel, improving their position by over 20 spots before handing driving duties over to Brandon Schueler at the halfway point.  Late in the race, Schueler found himself in fifth-place, closing in on the lead pack with only 20 miles to go. Making three more passes on his way to the checkered flag, Schueler crossed the line in second place physically, ultimately landing the overall win on corrected time. RZR Factory Racing team member, Wes Miller, also made a run at the podium after starting 20th. Miller finished third overall.

Kristen Matlock returned to defend her 2019 Pro UTV Naturally Aspirated win, alongside Kaden Wells, the perennial podium contender, who finished second in 2019 at the race. Wells started fourth off the line followed by Matlock, who started in the 12th position, last among the Naturally Aspirated competitors. The duo of RZR XP 1000’s worked their way through the field and were aggressively charging toward the front. At the halfway point, Matlock took the lead both physically and on corrected time. Heading towards the finish, Matlock felt the pressure of fellow RZR driver, Dodge Poleman, followed by Wells in third. Kristen Matlock maintained the lead despite the pressure, and took the opening round victory, cementing herself back-to-back San Felipe wins. Poleman and Wells rounded out the top three.

In the Pro Stock UTV class, Mike Cafro and Jamie Kirkpatrick of Black Hills UTV, debuted their brand-new Polaris RZR Turbo S machine. Cafro started eighth off the line in class, behind over 50 other UTV’s. Meticulously navigating his way through the rough and dusty terrain conditions of San Felipe, Cafro found the front of the Pro Stock class, where he took the opening round win in class, and an impressive fourth-place overall UTV finish. Fellow Polaris RZR driver Scott Trafton finished third in the Pro Stock class.