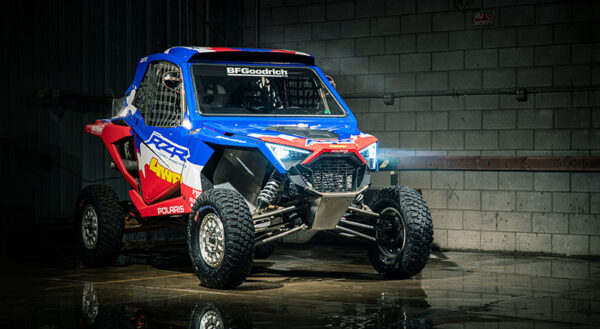 Polaris reveals the RZR Pro XP, that their three factory team drivers will race in the SSV class at the 2021 Dakar Rally. This will mark the first time that the RZR Factory Racing Team races at one of the world’s most grueling and historic desert race, The Dakar Rally.

The RZR Pro XP that the Team is bringing to compete at Dakar is powered by a 4-stroke fuel-injected, DOHC, turbocharged, twin cylinder 925cc engine, fueled by a 130L fuel cell, and capable of a top speed of 130 KPH (80.77 MPH). A Motec® ECU with custom wiring and dash, custom switch pad and onboard diagnostics will ensure optimal performance, and a rear-mounted radiator with a custom roof scoop will provide maximum airflow. A lightweight lithium battery set up by Braille Battery® will power the RZR Pro XP throughout its inaugural Dakar campaign.

The Team is also using an FIA homologated chassis, customized by Jimco Racing®, and based off the Polaris RZR Pro XP platform. With a 96” wheelbase, 74” wide stance, and custom suspension with an additional 1.5” of travel compared to stock, the vehicle is built to perform on the harsh Dakar terrain. A custom FOX RACING SHOX® suspension with increased reservoir capacity has been chosen for increased cooling, performance, and greater adjustability. In the cockpit, Sparco® racing seats and safety harnesses ensure comfort and driver safety during the 12-day race. The chassis also has an integrated spare parts and tool storage supply, which will undoubtedly prove imperative since there will be no pit crew, and drivers will need to make their own repairs while on the course.

For the nearly 5,000-mile-long race, the team has chosen to utilize 30” high-performance BF Goodrich® tires, wrapped around sturdy aluminum 15” Method Race Wheels® with beadlocks. The vehicle is equipped with a full four-corner hydraulic disc brake system, with a dual master cylinder setup and driver-controlled brake bias for maximized braking performance and control to navigate the unknown obstacles that have made Dakar a race all its own.