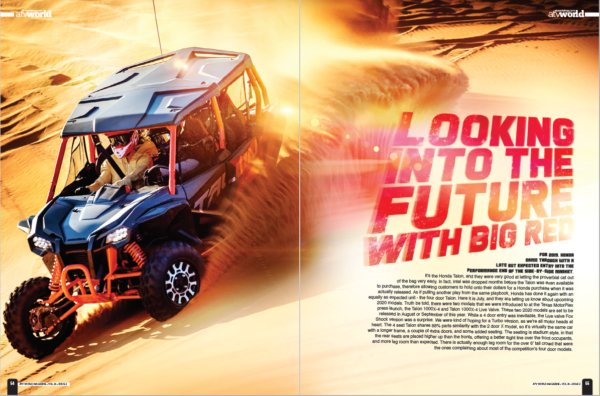 For 2019, Honda came through with a late but expected entry into the performance end of the Side by Side market. It’s the Honda Talon, and they were very good at letting the proverbial cat out of the bag very early. In fact, intel was dropped months before the Talon was even available to purchase, therefore allowing customers to hold onto their dollars for a Honda purchase when it was actually released. As if pulling another play from the same playbook, Honda has done it again with an equally as expected unit – the four door Talon. Here it is June, and they are letting us know about upcoming 2020 models. Truth be told, there were two models that we were introduced to at the Texas MotorPlex press launch, the Talon 1000X-4 and Talon 1000X-4 Live Valve. These two 2020 models are set to be released in August or September of this year. While a 4 door entry was inevitable, the Live valve Fox Shock version was a surprise. We were kind of hoping for a Turbo version, as we’re all motor heads at heart. The 4 seat Talon shares 88% parts similarity with the 2 door X model, so it’s virtually the same car with a longer frame, a couple of doors, and some added seating. The seating is stadium style, in that the rear seats are placed higher up than the fronts, offering a better sight line over the front occupants, and more leg room than expected. There is actually enough leg room for the over 6′ tall crowd that were the ones complaining about most of the competition’s four door models.

The four door is an X model, meaning it’s a 64” wide car, just the same as most of your other standard models from Polaris, Yamaha, and a lot of the CanAms. We were not able to test drive the four door, but were able to sit in it and go over it. Plus, they had a skeletonized version for us to look over many of the build quality details. We are looking forward to the release and actually getting our hands on the Live Valve model to see if Honda has one-upped its competitors.

Live valve is Honda’s answer to the Polaris Dynamix version. We have not been able to test it, but the technology is coming. Honda worked with Bosch to develop a control module that takes readings off a multitude of things, to make suspension adjustment at about 16 times per second; throttle, braking, steering, and gear-selection are all factored in. Essentially, the Live Valve takes a lot of reads from what the car is doing, and makes very fast changes to the low speed compression adjustment, to better your ride. Honda only showed it to us in the 4 door model, but if we were betting people, we would bet on it being released on the 2 door sometime in 2020 as well.

Honda did bring a Turbo car for us to test drive at the Texas
MotorPlex, it just wasn’t a Honda product….yet?

The Turbo was brought to us by one of Honda’s long time racing partners, Jackson Racing. Jackson Racing has worked with Honda since the 70s on forced induction for the automotive line, including racing Hondas in many different organizations, and winning championships in many different automotive formats including SCCA and Score. This is a complete, well developed package and is going through California’s Air Resource Board testing now, so it should pass the toughest of emissions testing. The complete kit should be available sometime in August at a retail of $5799 U.S. The kit is very complete and relatively easy to install in about 5 hours.  Honda had already made the oil passageways tapped and plugged in the cases, making it a bolt-on package. Jackson racing worked with Garrett to develop an OEM quality Turbo. It includes a tig welded, heavy wall, stainless steel exhaust manifold that bolts to the stock exhaust. The intercooler uses a Garret core, with Jackson Racing cast end tanks for durability and maximum cooling. A new high-flow air filter system is also included with the kit. Jackson supplies an ECU tuning tool to re-flash the stock ECU, correcting many parameters including shift points, fuel mapping and more. The turbo kit is truly bolt-on, no welding, tapping, drilling, and is completely plug and play.

We were only able to get one lap in the Turbo equipped car. Each editor was given a practice lap around the couple mile Motorplex track, and then given one lap in the Turbo equipped car. It was nice to actually get some kind of feeling for the car, but we were a bit to constrained in time, and having to follow a lead car kept us reigned in a bit, so we can’t really give you a full test. The turbo certainly gave it a significant boost in HP. We did notice that the turbo spooled up really quickly in the low gears, and if you stayed in the throttle, it stayed spooled up throughout the gears. It seemed to have less turbo lag than any of the other current production cars, but then again, test time was extremely limited. Jackson Racing claims a 60% horsepower increase, while still using 91 octane pump gas.

We’re hoping to get a kit from Jackson Racing ASAP, so we can do
an actual evaluation. So stay tuned.