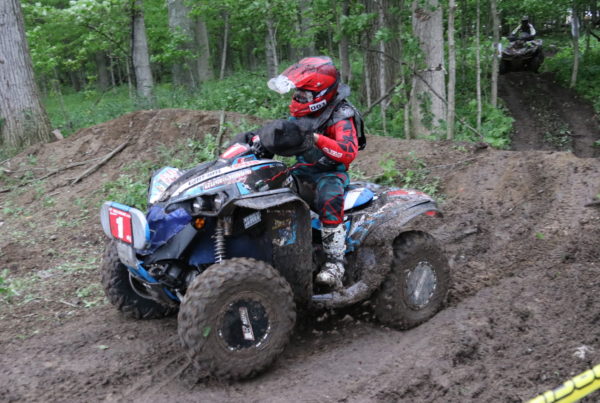 Can-Am starts the summer season off right with a big win and podium results in Grand National Cross Country competition. Here’s the official word from Can-Am:

Can-Am Renegade X cross-country ATV racer Kevin Cunningham, the defending 4×4 Pro class champion, won the 4×4 Pro class and 10 a.m. session overall this past weekend at a mud-soaked X Factor Grand National Cross Country event held in Peru, Ind. Cunningham used the horsepower and 4×4 capabilities of his Can-Am Renegade ATV to his advantage in the mud, winning by more than a minute. With his five wins and six podium finishes in six GNCC rounds this year, Cunningham owns a sizable 38-point lead heading into round seven of the GNCC ATV series.

Bryan Buckhannon finished second on his Can-Am Outlander 4×4 behind Cunningham,  giving Can-Am a 1-2 finish at the X Factor race. In fact, it’s the fourth time this year that Can-Am 4×4 racers have garnered the top two finishing spots in the 4×4 Pro class this season. Buckhannon’s five podiums in five rounds (he missed round four due to a race in Europe) have him sitting in third place, only one point behind second place.

The Can-Am ATV and side-by-side racing team travels May 27-28, to The John Penton GNCC in Millfield, Ohio, which is round seven for the ATV series and round three for the UTV series.

Kevin Cunningham (right) and Bryan Buckhannon went one-two in round six of GNCC action in Indiana.

Getting out front and staying there was key in with muddy conditions prevalent.