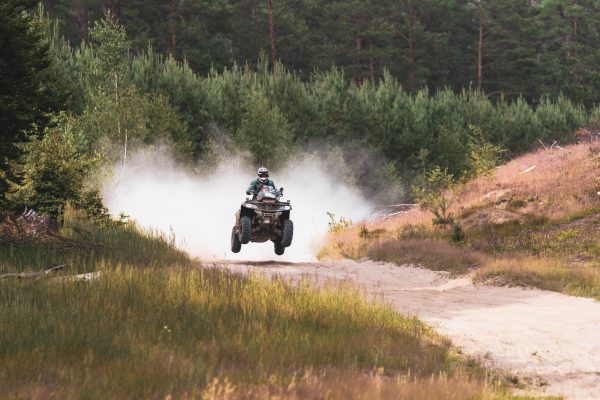 Day 3 of the Breslau Rally waslongest so far

In the midst of one of Europe’s biggest rally-raid events in Poland, the competitors had to endure a long and tiring Wednesday. Although the day was long, they had only a fewsporting kilometres. The entire caravan of more than 200 crews, together with their supporting team members, moved to a new bivouac near the Drawsko Pomorskie training ground in the first half of the day.

After almost 300 kilometres to the new bivouac and the training ground, where the race will take place for the rest of the days, the teams had to wait for a long time for the start, which was delayed by the organisers, and finally onlystartedafter 8 pm. However, this delay caused the organisers to shorten the course, leaving only one section of almost 80 kilometres instead of the planned two. The CFMOTO Thunder Racing Team riders are already familiar with this place, as the rally was held in this area in few previous years.

Adomas Gančierius, who returned to the team’s camp just before the sunset, said that the navigation was very confusing, but he managed to get through it without any mistakes: “It was a very good speed section – I liked it very much. I tried to go fast, but at the same time I was very neat. I was careful to adjustthe metres in the navigation systemat every corner to minimise the error. The navigation here is very difficult, with lots of roadshere and there, but I managed not to make any mistakes and looks likeI finished first.”

After the finish, A. Gančierius said that his quad had not suffered any damage and was ready for the next day’s start.

Antanas Kanopkinas, who hasn’t had much success in this rally so far, was happy to finally get through the special stage and get back into the rhythm of the rally: “A new bivouac, a new place. Finally, I was able to get rid of the bad karma thatsomehow was leading me. I managed to get through the speed stageand finish with only a few minimal mistakes and no losses. I finished in the top ten and I hope to get back to the top of the results table in the upcomingdays.”

The athlete managed to record the seventh fastest time in the quadclassification and is climbing up the overall results table after a difficult start to the rally.

Thursday will be a marathon day with two speed stages during the day and one at night. Both team members are in high spirits and say that the increasingly difficult navigation on the course only makes the race more interesting. With two days of racing left, the CFMOTO Thunder Racing Team athletes areworking towards their goal of at least 30 days of racing per year – that’s a big part of the team’s preparations for the upcoming Dakar Rally.

Day 4 of the Breslau Rally: competitors finished at night after the marathon

Almost a week of rallying in Poland is drawing to an end as the participants will cross the finish arch on Friday, but the organisers are not letting the athletes relax. On Wednesday, the athletes had to wait for a late start, and on Thursday they had a marathon day with a night speed section that proved a challenge for many.

“We were a bit short of speed on the first speed section of the day, but that’s okay – we knew we were slower on these types of sections. On the second speed section I had navigational difficulties that took a long time to resolve, but that’s the way it is for me in this rally – one section is good, one is bad, anotheris good again,” laughed CFMOTO Thunder Racing TeamriderAntanas Kanopkinas after the finish on Thursday.

With an engine failure on the first day of the rally that resulted inloss of positions in the overalltable, the rider says that he can now try different tactics on the track and do things that he wouldn’t have allowed himself to do when competing for the top positions.

“I really enjoyed the night stage, maybe it was a bit too easy – it has been much harder in the last three years, or we just learned how to drive because we saw that the others had a lot of navigational difficulties, but we managed to cope with it without any problems,” said A. Kanopkinas.

Speaking about Wednesday, AdomasGančierius said that it was not a standard Breslau Rally day: “We had a very late start because there was a NATO exercise at the training ground. The organiser left only one of the two speed sections, which was very successful for me. I did it successfully, without any navigational errors.”

Ahead of Thursday’s night speed section, the CFMOTO Thunder Racing Team rider said that he had also done very well: “Today we had two speed sections – 99 and 66 kilometres. It went well, the sections werefast. I managed to pass without any navigational errors and I’m happy with the result.”

A. Gančieriusalso did well in the night section and managed to record the second fastest time among the quads. On Friday, the final kilometres awaits and the finishing arch will close the rally.

Breslau Rallyis over: another victory on the way home

One of Europe’s largest rally-raid events, the Breslau Rally, took place for a week in the western part of Poland, on two military training groundsnear the towns of Zagan and Drawsko Pomorskie. More than 250 crews lined up at the prologue start line last Sunday, competing on motorbikes, ATVs, SxS, carsand trucks.

CFMOTO Thunder Racing Team’squad racersAntanas Kanopkinas and Adomas Gančierius took part in the eventas well. At the start of the season, the team announced its plans to compete in 2023 Dakar Rally and set a target of at least 30 days of racing per this year. So, with both athletes having conquered the challenges of the Polish polygons, the team has added another five days to their preparation for the big challenge and is returning home with a solid result.

For one of the team members, A. Kanopkinas, who came second in the quad standings last year, this year’s setbacks started on first day. Due to technical problems, he failed to complete the first two special stages and, after receiving time penalties, dropped down at the results table. In the remaining days, he tried to recover his lost positions and after the last speed section, he moved up to the top 15 in the overall quadstandings.

“So the Breslau Rally is over. Half of the last stage was very fastand the other half was a navigational challenge. I really enjoyed it, I didn’t make any mistakes, but I drove really carefully, protecting my quad, because there was no chance of moving upin the standings,” said A. Kanopkinasafter crossing the finishing arch, adding that the goal of the last day of the rally was to finish the race safely, without causing any damage to his technique.

Another team member, A. Gančierius, fought for position in the results until the last kilometre, with only a few seconds separating him from the third-placed rider in the overall results before the last stage. In the last Rally Breslau, the quad racerwas going third  but finished in fourth positionas a broken wheel on the last day ruined his result. This year, it was the other way around: after starting fourth in the last stage, he managed to overtake his rival and climb onto the third place podium.

After finalstage, A. Gančierius thanked everyone who supported him and the team and said that the rally had been a very good one, albeit not easy: “On the last day of the rally, I lacked sleep and concentration, with only four hours between the finish of the night stage and the start of the morning stage. Today’s special stage was really interesting, so all is well, the finish is achieved. I made a navigational mistake in the second part of the section which lost me about half a minute, but I’m happy to be at the finish without any serious incidents and with a healthy technique.”

He said that in this rally you can always get everything you expect. There was rain, dust, sun and mud: “It was a good and interesting rally that required a lot of concentration because the speeds are high and the navigation is difficult. Thanksto everyone who supports and watches. It was fun and we’llsee you at the upcoming Balkan Rally.”

The CFMOTO Thunder Racing Team’s next start will be at the Balkan Offroad Rallyein Romania at the end of September. This is a competition that takes place in extremely beautiful terrain and requires not only a lot of strength but also a high level of skill from the riders.