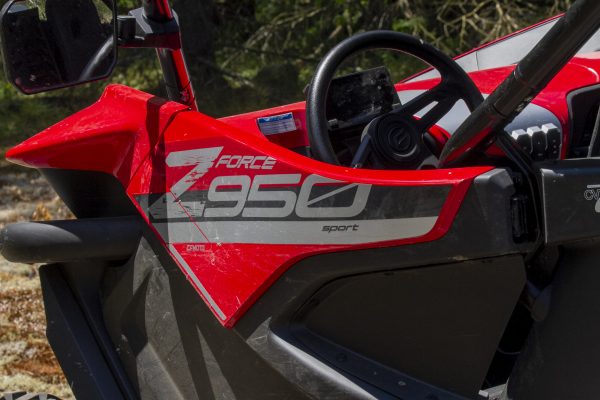 We threw the most brutal trails we could find—on the hottest day of the summer—at CF Moto’s ZForce 950 EPS Sport. Did it survive? Read on

The global pandemic has been a right pain in the ass. And that we’re all ready to get back to normal (even if we’ve forgotten exactly what normalmeans) is, in the charged political climate of today, perhaps the only thing on which we can all agree. But now we can add one more thing to the list of what we agree on—the great caterpillar invasion of the summer of ’21 is running a close second to the pandemic in terms of aggravation for off-roaders.

Not being able to ride your ATV or side-by-side is, admittedly, a first-world problem. But (most of us, anyway) have adhered to public health regulations and stayed at home and off the trails, or kept to our regions, or ridden only with family members. No cookouts, campouts, mud-bogs or club runs. To finally return to the woods is like returning home. But not this year. And, unimaginably, it has nothing to do with the pandemic. Instead, it’s those caterpillars. But that’s not our only problem.

As we unload the $18,999 CF Moto ZForce 950 EPS Sport from our trailer (along with our Can-Am ATV photo mule) on the eastern shore of Ontario’s Georgian Bay, we’re not yet aware of what we’re in for. And it’s hot. Really hot. The kind of heat that makes the roll cage of the ZForce, when you lean against it, feel like the grill of a barbeque.

Suited up and ready to go, we blast onto a new-for-us trail system (and yes, we’ve got passes) and immediately run into our first roadblock. To say the trails are gnarly is to grossly underestimate reality. The ruts are deep enough to strand a giraffe on its belly and the trail is so tight that there isn’t any way to circumnavigate the ruts. And, despite being in the midst of a drought, the ruts are muddy. But it’s not just any mud. It’s mud masquerading as quicksand, and Ontario, on this day, is doing its best to emulate a Florida swamp in August’s heat.

And just like that, we’re stuck. Really stuck. It’s as we unfurl the winch and walk toward the stoutest tree we can find that we become aware of the caterpillars. They hang from branches like sinister Christmas ornaments. Some are the height of your head (all the better to get stuck in your hair) while others cling to your body, your gloves, and your boots. They’re everywhere. And in the silence of the early morning you can hear them crunching on leaves, shredding the foliage until the trees are bare.

Due to the burgeoning popularity of side-by-sides, most trails today have been subtly tweaked to allow wider, less maneuverable side-by-sides to play in the woods alongside ATVs. But not this trail. Unlike our tag-along ATV, which can thread through trees—even if it, too, struggles in the quicksand—the ZForce has a much wider turning radius, which necessitates three-point turns to keep it on the trail. Unfortunately, all the back-and-forth to keep the ZForce between the trees means forward momentum is sacrificed. Did we mention the ZForce has a winch? Thankfully, it’s a very good 3,500 lb capacity winch. And it’s standard, too.

While a compromised turning radius isn’t solely the ZForce’s fault (the competition is scarcely better) a wonky driver’s side seatbelt is making life difficult. When you’re in and anxious to go, the seatbelt must be withdrawn with the speed that a fish climbs a tree or it locks solid. Had we been chased by bears we’d have been lunch meat by now.

With an 8-valve, 963 cc V-twin that claims 79 horsepower at 7,000 rpm and 60 lb ft of torque at 6,200 rpm, the ZForce isn’t lacking for gumption. It doesn’t have the eyeball flattening power of the boldest and brightest from the major OEMs, but outright power, on most of the trails we ride, is as useless as trying to fully exercise a 700-plus-horsepower Hellcat Charger in Monday morning commuter traffic.

Often, on machines we test, it’s the little—and not so little—details that make the difference. And today, when frequent hydration is a necessity, the rear box (a $673 option) mounted in the bed is a lifesaver. Instead of jamming water and power bars into backpacks that’ll get covered in caterpillars, we keep our goods and our camera high and dry in the box, which has a generous 100 kg capacity.

Too bad we can’t say the same for our feet. While we acknowledge half-doors give most side-by-sides a lighter, more athletic look, the charm wears off the first time you hammer through water. Or quicksand. Fortunately, it’s a problem rectified in the way most problems can be fixed—by an infusion of cash. Dry feet and legs are yours for the $673 required to buy the optional door kit. Make it standard, CF Moto, and the world will beat a path to your door.

If the arduous trail conditions had an upside it’s that we were able to determine that the ZForce’s CVT transmission is a gem. Even in the intense heat, power was always available and thrust instantaneous, and credit must also go to the excellent calibration of the Bosch fuel injection.

We didn’t get enough high-speed running in so we can’t confirm the acceleration in sport mode is “startling” (CF Moto’s words), but a spell on a fire access road let us know the ZForce has more than adequate power. Suspension wise, 280 mm of front-end travel is facilitated by a double A-arm system while 300 mm of rear travel is via a trailing arm setup. Both front and rear suspension is adjustable for compression and rebound damping. Wheels are aluminum, with 14-inch rims with a width of 7-inches up front and 8-inches out back. Tires are 27 x 9 x 14 front and 27 x 11 x 14 rear.

Shifting between two-wheel-drive and four-wheel-drive is smooth and effortless, and the differentials lock electrically. And, speaking of electricity, we just couldn’t live without the electric power steering.

The ZForce, to our eyes, is a handsome machine, with a notable exception. The dual air intakes to the aft of the cabin look like the kind of rocket launchers you see in low-budget, straight-to-video sci-fi movies. They made us think of some of the questionable styling flourishes on the cheap electric scooters that clog bicycle commuter lanes in the inner city.

At first blush it would appear that the externally-mounted rearview mirrors, turn signals, and horn are out-of-place on a dirt machine. But even if you aren’t able to ride on public roads where you live, they’re surprisingly useful, as a short stint on a secondary road confirmed. While driving back to our tow vehicle (we weren’t up to the challenge of retracing our route through the woods) we were trailed by a man in a Ram who felt the urge to rule the road. Instead of simply swerving around us, he hovered his massive grille two-feet off our tailgate. But a simple application of the right turn signal and the gentle but progressive application of the brakes deterred him enough that he passed. With the demon trucker passed, is was easy enough to rejoin the road.

Our only reservation with the road-going equipment is its integration into the ZForce’s design. For the last near-century horn buttons have been successfully placed in the centre of steering wheels. Why side-by-side manufacturers (CF Moto is not alone in this) continue to have the horn and turn signals operated by switches in the centre console puzzles us. A steering-wheel-mounted horn button isn’t obtrusive and can be operated with the most cumbersome gloves. We challenge anyone, when faced with the urgency that the use of a horn warrants, to find the rocker switch the instant you need it. You won’t. Ah well, you can always revert to the old standard and yell obscenities instead.

While we liked the view from the ZForce’s externally-mounted mirrors, they’re vulnerable to damage from branches knocking them out of position. Eventually, we stopped readjusting them and marveled at the view of the forest floor as we trundled along. At the very least, the roll cage exoskeleton should have protrusions to protect the mirrors, or maybe a better option—at least if you don’t opt for the rear storage bin which would block the view—is to opt for the $173 mirror that mounts inside the cabin.

We almost felt bad for the conditions we put the ZForce through. But tough conditions immediately bring the weaknesses of a vehicle to the fore. And the ZForce comported itself extremely well. Yes, CF Moto has a few minor issues it could address (couldn’t we all) but the ZForce is a sound machine. Best of all, it has a limited five-year warranty—and a company willing to stand behind its machine gets our vote every time.