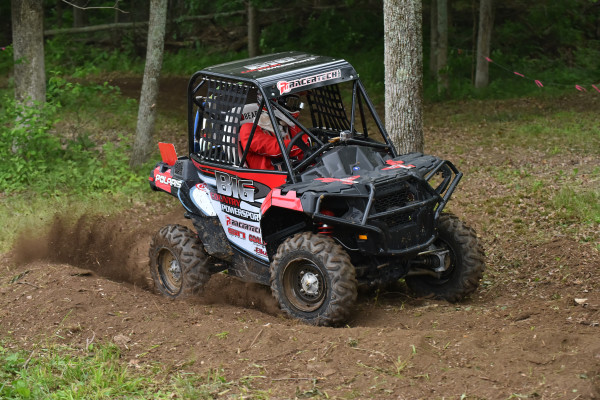 Team UXC Racing’s Michael Swift would make it two-in-a-row by taking the win in the Pro 4×4 class, on his Scrambler 850, at GNCC’s John Penton, in Millfield, OH duing the June 6-7 event.

Pro 4×4 teammates Swift and Kevin Trantham worked their way into position through lap one. Trantham suffered a drive belt issue pulling him from the race. Swift swapped positions a couple of times for second and then took advantage of a line in the woods to make a clean pass for the lead. Swift was able to hold the lead for his third Pro 4×4 Class win of the 2015 GNCC season.

The Single-Seat class continues to see increased numbers with eight Polaris ACE vehicles on the line for the start. Sam Yokley would take his second win of the season with Doug Fortner finishing second and Dillon Harper finishing third. Jesi Stracham, racing her second race of the season in her Racer Tech modified Polaris ACE, would take the holeshot but missed a turn, had a mechanical and ended up finishing seventh.

Team UXC Racing would also be represented at the first Round of the TORN season by Chris Robinson and his Scrambler XP 1000 EPS. Robinson would take an impressive second place finish for a solid start to the season.

The next GNCC race is the Snowshoe, at Snowshoe Mountain Resort, in Snowshoe, WV, June 20-21. This is the last race before the summer break. The next TORN race is the June 27-28.