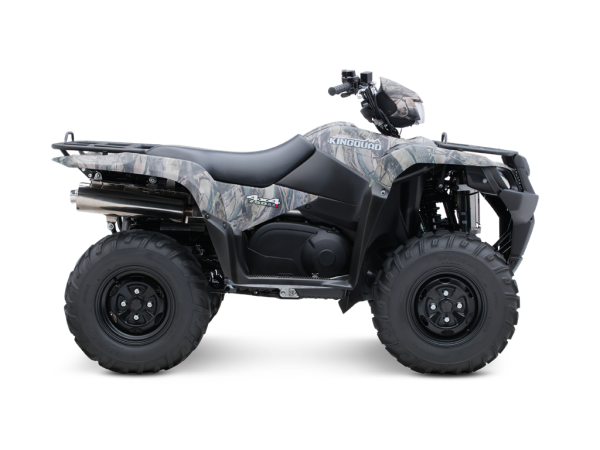 Despite 2014 marking Suzuki’s 50th anniversary of bringing their product to American soil and also be recognized as the first to build a four-wheel ATV, the 2014 lineup is a return of of products from 2014. Perhaps the most notable change for 2014 is the absence of any full-size sport quads. Only the Z90 is badged as a 2014 model and a visit to their website shows the Quad Sport Z and Quad Sport Z Limited as carry over 2013 and 2012 models respectively. Here’s the official word from our pals at Suzuki:

While celebrating 50 years in America, and 30 years of being First on 4 Wheels, Suzuki Motor of America, Inc. (SMAI) announces its 2014 ATV lineup, including the return of the sporty, entry-level QuadSport Z90, as well as a complete roster of KingQuad sport-utility ATVs.

The Suzuki KingQuad lineup is assembled in Georgia at the Suzuki Manufacturing of America Corp. facility, and is lead by the KingQuad 750AXi Power Steering ATV. Its blend of features such as Suzuki fuel-injection, fully independent suspension and a compact electric power-steering system make it the ideal choice for the ATV rider who takes work and play seriously. The KingQuad 500AXi Power Steering model combines many of the same top-notch features with a slightly smaller engine. Both the 750AXi and 500AXi are available without power steering.

The return of the QuadSport Z90, with rider friendly features like its easy-to-use CVT transmission and electric start, will delight families with younger riders.

The 2014 lineup of Suzuki ATVs also includes the Ozark, a 250cc two-wheel drive sport-ute with lightweight performance and a powerful price point.

As the creator of the four-wheeled ATV, Suzuki delivers First On 4 Wheels leadership into 2014, just as it did with the Suzuki LT-125 three decades ago.