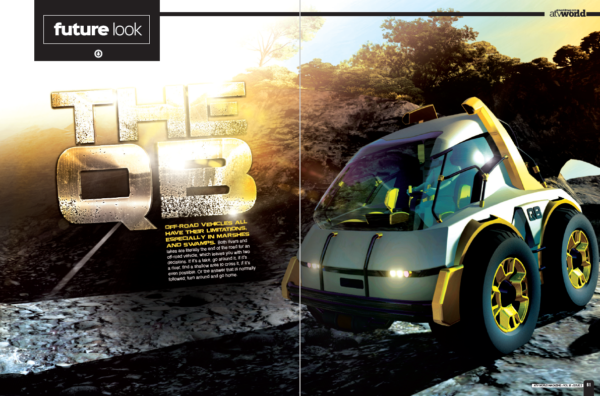 Off-road vehicles all have their limitations, especially in marshes and swamps. Both rivers and lakes are literally the end of the road for an off-road vehicle, which leaves you with two decisions. If it’s a lake, go around it, if it’s a river, find a shallow area to cross it, if it’s even possible. Or the answer that is normally followed; turn around and go home.

In 1959, the BB Carrier was invented by J-A Bombardier, and it was designed to handle everything from marshes to deep water, allowing the driver to never have to turn back because of the terrain. Unfortunately, due to a low demand, the BB Carrier was only in production from 1959 through 1961, and was never produced in large numbers.

Understanding that marshes, swamps, rivers and lakes still pose a problem for off-road enthusiasts, Charles Bombardier started to think outside the box, and figure out how a next generation amphibious vehicle with a price tag of around $40,000 could be designed.

The QB is an amphibious, enclosed cab,
side-by-side vehicle designed to keep the driver and one passenger free from
the elements, and able to traverse not only marshes, but also deep water lakes
and rivers, 12 months of the year, no matter the season.

To keep the weight of the QB to a minimum, it would be manufactured on an all aluminum chassis with a modified 100hp Rotax 1000R engine. The Rotax 1000R engine is important for the QB, as it can be adapted to drive a hydraulic system. One of the features of the QB is that it would be equipped with four hydraulic motors, one being on each wheel. The automatic transmission would feature high, low and reverse gears, similar to other side-by-sides.

With lots of focus on the steering of the QB, the driver can alternate the steering mode between power steering and skid steering, depending on the need. When in the power steering mode, all the wheels could be steered to allow for a short turning radius. With concerns to the environment, the QB was designed to have less of an impact as the power distribution would be managed by an onboard computer system. The system would optimize traction and minimize the environmental impact by limiting tire spin, and thus the destruction of the top layer of soil, and would further reduce the ground impact. The onboard computer system would also provide for greater fuel economy by changing tire inflations, and also managing power distribution to each wheel while on the fly.

Charles Bombardier designed the QB to be an off-road vehicle that could do everything and everything extremely well all for around the $40,000 mark. Charles did comment that he felt the QB is a little larger than needed for a side-by-side, as it was designed to accommodate large tires and was inspired by two of his other designs, the Fat Truck which is in production, and the Typhon which is a prototype.

The QB Concept was imagined in May 2019 by Charles Bombardier, and the images were created by Adolfo Esquivel.