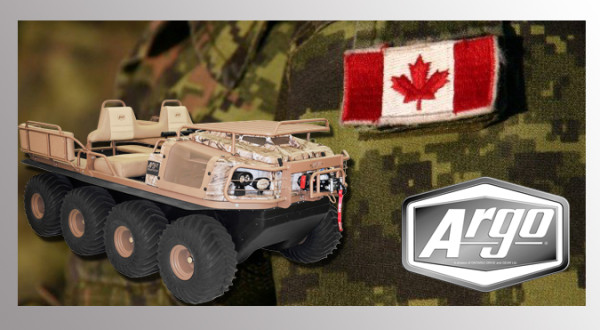 ATV World recently learned that ARGO is starting a new service appreciation program for all past and present members of the Canadian Armed Forces. We tip our helmets to ARGO and the work they are doing to support our troops.  Below is the official press release:

New Hamburg, ON – Today, ARGO, the world leading amphibious vehicle manufacturer announced a new discount program for all past and present members of the Canadian Armed Forces as well all military reservists such as the Canadian Rangers who patrol the country’s sparsely populated north.

From Remembrance Day – November 11, 2015 – onwards, all active Canadian Ranger service members will be eligible for incentives worth up to $1,000 off the purchase price of any new ARGO.

Qualified Military service members will qualify by signing up through a membership form and by providing a copy of their government issued photo ID card to any participating Canadian ARGO dealer.

“As a Canadian-made brand, ARGO is a proud supporter of Canadian Armed Forces members and this new Service Appreciation Program is our way of honoring and rewarding the dedication of the men and women who serve and defend our country at home and abroad.”

Fisher continued: “Many of the Canadian Rangers who participate in sovereignty and surveillance missions in our country’s far north often use their own ATV’s and snowmobiles and given the ARGOs incredible versatility in both extreme temperatures and terrains, we’re confident that those on the front line will take advantage of this new Service Appreciation program which will no doubt benefit them both from a professional and personal standpoint.”

In service with both NATO and Allied Military Forces worldwide, ARGO vehicles take on missions ranging from troop transport to reconnaissance to command posts to logistics support.