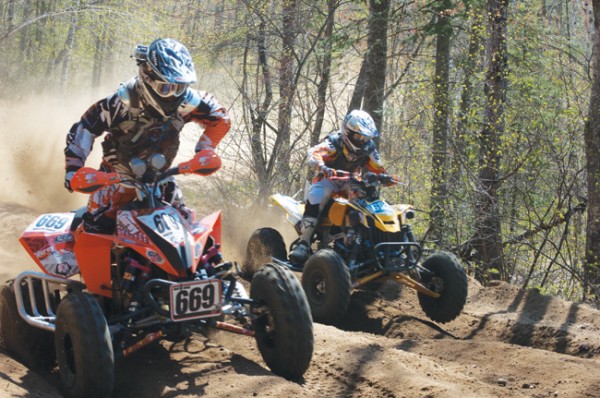 In this edition of the Great 8, we take a look at the 8 toughest ATV Races of all Time! Fro tough terrain, to endurance to gruelling trips through sand, mud and snow, this is what makes these 8 races pure punishment!

Slated as the world’s toughest ATV race, The Can-Am Trophy takes place in the Ural Mountains in Russia. It’s a three round series with three stages for each round. The brutal, two day event covers an average of 200 miles between multiple Russian towns. Every mile is a mix of mountains, woods and deep mud bogs. The quad class features teams of two riders on separate machines. The terrain is amazingly technical, and the kicker is the virtual GPS check points that each team must pass through. Checkpoints are placed in areas that are nearly impassable on foot. The teams must manage to get at least one machine within a meter of every checkpoint, whether riding, pushing or winching.

Race entrants carry a GPS tracker, and spectators can watch via the internet or on a big screen at the actual event. Trophy promoters claim to have over a million fans following the event via the satellite monitoring. The Rosan Company, a BRP distributor for Russia, along with the series organizer, give away valuable prizes for winners at the end of the 3 race series. Cool prizes like the Can-Am Spyder Roadster, Outlander 4X4, and the Commander UTV. www.canamtrophy.ru

Formerly known as “Paris-Dakar”, the 9000 KM multi-day, desert race was originally held from Paris, France to Dakar, Senegal. The race has been held annually from 1979 until present, with the exception of 2008. The 2008 DAKAR was cancelled due to security threats in Mauritania. In 2009 DAKAR was moved to run in South America, across Argentina, Chile and Peru. The DAKAR is still currently in South America with planning in effect for the 2013 event.

In DAKAR, professional and amateur entries must cover up to 560 miles per day, ranging from the nastiest, to the most scenic terrain. Crossing mountains, deserts, forests, rivers and fields, the DAKAR RALLY is the very definition of diversity. Motorcyclist and DAKAR conspirator/promoter Thierry Sabine coined it “A challenge for those who go. A dream for those who stay behind.” The DAKAR was Thierry’s vision while lost in the Libyan Desert on a motorcycle during the Abidjan-Nice Rally in 1977, and he vowed to share the amazing experience with the masses.

The DAKAR Rally currently has classes for Cars, Trucks, Motorcycles, ATV’s and UTV’s. The 2012 ATV class was absolutely dominated by the big bore Yamaha Raptor 700s. Yamaha took the top six ATV positions, and Polaris RZR XP900s boasted the top two positions for the UTV class. In the 31 years of DAKAR, 25 racers have lost their lives, along with another 30 related deaths to non-racers. DAKAR showcased the world of Off-Road Rally Racing to 4.5 million live spectators and 1 billion viewers. The 2012 DAKAR was televised in 190 countries with over 1200 hours of footage.  www.dakar.com

This Grand Prix type event on the coastline of Buenos Aires, Argentina has been running since 1992. While the amazing 10km course runs through massive sand dunes, through a pine forest and along the edge of the sea, what actually puts the Enduro Del Verano on the list is sheer numbers. Adding to the excitement and difficulty of this race is that all the ATVs start at the same time. The ATV race has 300-400 racers, all vying for the holeshot at the same time. The motorcycle heat has over 1000. www.endurodelverano.com.ar

This is the introduction to Romania’s Hunt the Wolf ATV race. Dominated by 4X4 utility machines, this race takes man and machine through 500KM of the most diverse and extreme terrain the world has to offer. It includes city sections and jumping over cars with ramps, into deep mud, or in the wilderness over huge logs and rocks. It varies from racing full speed for the holeshot, into narrow rocky riverbeds, and forests thick with trees. This race is the full experience, with truly every terrain known to man. www.Hunt-The-Wolf.com

Canada’s own Numb Bum is truly one of a kind; the only 24 hour motorcycle/ATV race you will ever find on a frozen lake bed. The Numb Bum races quads and motorcycles at the same time, on the same course. This crazy and cold endurance race has been taking place every year since its induction in February of 1984. The Numb Bum requires racers to race non-stop for 24 hours around 18km long laps on a frozen lake. The Numb Bum has been held at many different venues over the past 29 years, and is currently held at Sandy Beach, both of Onoway, Canada. www.aeira.com

The city of La Tuque in Quebec, Canada hosts this annual 12 hour endurance race. With a format similar to France’s Pont De Veaux race, racers from all around the world show up to battle for three separate four hour motos. What makes La Tuque tougher than other endurance races is the dirt, or lack of it! Nearly the entire course consists of sand. With fast straightaways and super tight tree filled corners, the La Tuque course quickly deteriorates as the race wears on. Pro lap times are close to three minutes for the first few laps, yet tremendously deep whoops and ruts turns lap times to nearly 5 minutes by the end of each heat. The course is completely regroomed in between heats with a tractor, but after an hour in, you would never know that they have groomed it. La Tuque consists of two 4 hour daytime heats and one 4 hour night time heat. Last year’s 10th annual event was won by Motoworks CAN-AM’s Josh Frederick, Jeremie Warnia, and Dillon Zimmerman.

The Blackwater 100 was easily the United States toughest off-road race, and was started in 1975 by Dave Coombs of GNCC fame. The infamous “highway 93” river crossing was such a nasty/muddy obstacle, that thousands of fans or “mud fleas” would congregate there every race, helping to pull bikes and ATVs to the top, when the riders would come up short. For racers with the talent or luck to top the obstacle, these “mud fleas” and their flying empty Budweiser cans would often become the next obstacle. The rugged and muddy Blackwater 100 was said to only be conquerable by the toughest men and machines. The 100 mile Blackwater race became the start of a Series called the Wiseco 100 Milers. This series evolved into the GNCC series in the early 80’s and then saw a huge influx of ATVs from the mid-eighties on.  www.gnccracing.com