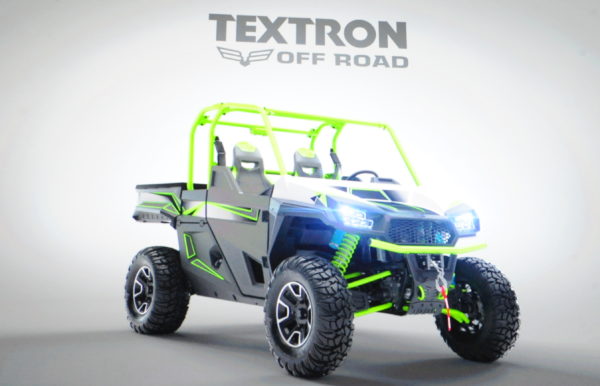 Earlier this week, Textron Off-Road held a small gathering in an airplane hangar in Texas to give a handful of dealers in attendance and other watching via live stream a glimpse into what the future holds. Just a month prior we learned Arctic Cat was acquired by Textron Industries and with the news came more questions than answers. While many Arctic Cat loyalists deemed the move to be a good one, giving the Cat brand greater ability to develop future models packed with innovations, others took a wait and see approach. During the hour-long presentation, Textron officials announced the Arctic Cat off-road division would be blended with Textron Off-Road, subsequently dropping the Arctic Cat nameplate from all models, but retaining model names such as Wildcat, Prowler, and Alterra. Joining this mix would be the Textron Off-Road Stampede model. In addition, Textron officials gave a first look at a future model that looks to be a direct competitor with the Polaris General and Can-Am Commander. The nameless vehicle shown here will tout more than 100-horsepower, KING shocks, bucket seats, an extended cab design for greater storage, and still more storage and capability with the integrated rear cargo box. The model is slated to be available at dealerships in the fall of 2017. The company also announced the much-anticipated Wildcat XX won’t be available until the spring of 2018.