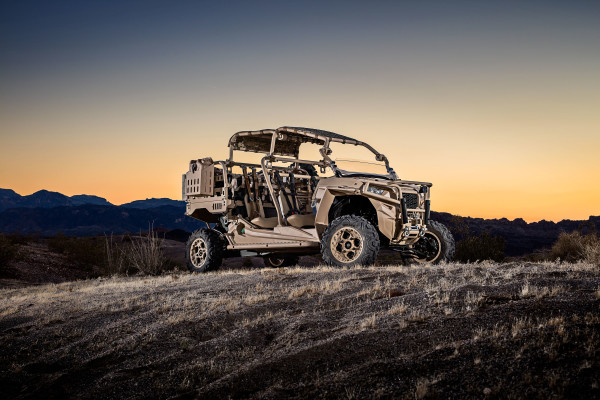 It’s no secret the U.S. Military is the most formidable and most technologically advanced in the world, despite efforts of the current administration over the past 8 years to reduce the size and scope of our men and women who defend our freedom. Political opinions aside, it’s safe to say the guys and gals in green have access to some bad to bone equipment, from ships, to jets, to massive tanks. Now they have another buggy at their disposal as Polaris Defense announced a new addition to their already formidable line-up of military focused off-road vehicles. The new MRZR-D introduces turbo diesel power to the fold, and it’s just the kind of power the military craves. You see the U.S. military, and virtually all military forces around the globe rely on diesel as their fuel of choice. Now with the MRZR-D, that fuel commonality is available in the ultralight off-road mobility category from Polaris. Here’s the official release from Polaris brass (no pun intended):

MINNEAPOLIS (May 18, 2016) — Polaris Defense, a division of Polaris Industries Inc., today announced the addition of a high-performance MRZR turbo diesel (MRZR-D) to its MRZR off-road vehicle lineup. MRZRs have redefined ultralight, off-road mobility for military vehicles and are mission critical for expeditionary forces in the U.S. and more than 20 allied countries to meet mission demands and threats while forward deployed. Polaris Defense will publicly debut the MRZR-D at the 2016 Special Operations Forces Industry Conference (SOFIC), in Tampa, Fla., May 24-26, and at CANSEC 2016, in Ottawa, Ontario, May 25-26.

To be as expeditionary as the warfighters that use them, MRZR vehicles are V-22 helicopter transportable and can be configured a number of ways, including two-, four- and six-person. The turbo-charged diesel engine in the new MRZR-D has been engineered to meet the performance and physical specs of the original MRZR vehicles. While many key features – like the dimensions, payload, towing, ground clearance, accessories, handling and other features – remain the same, Polaris incorporated feedback from the field in the new product, including updated occupant seating space, ergonomics and sightlines. The MRZR-D also provides increased auxiliary power and greater range, making it even more effective.

“The new turbo diesel powertrain is significant in reducing the logistics burden for select U.S. services and many foreign militaries that have strict requirements for diesel fuel,” said Jed Leonard, senior manager, Polaris Defense. “And as importantly for our military customers, we’ve engineered this diesel powertrain to meet the same mission requirements and extreme off-road performance that Polaris and the MRZR are trusted for in peacetime, security operations, and conventional military missions.”

“Throughout the last three years, we’ve had an open dialogue with Polaris about how we were using the MRZRs, and enhancements that would help us complete our missions more effectively. This has been very beneficial to us in the program office and the warfighters as Polaris has incorporated our requests. In the case of the MRZR-D, we suggested changes to improve sightlines and ergonomics which were incorporated,” said Brendon Reedy, LTATV acquisition program manager, PEO-SW/FOSOV, USSOCOM. “It’s nice to see commercial companies such as Polaris continue to invest in the Defense industry and we’re happy those investments have resulted in a turbo-diesel MRZR.”