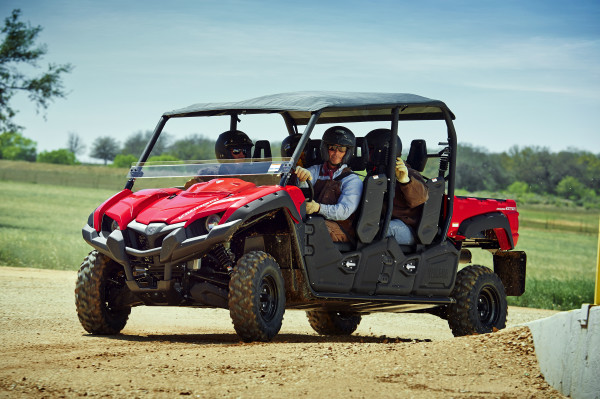 With new model information starting to trickle into the ATV World offices as the 2015 models begin to see daylight, Yamaha made an early move today with the announcement of a “bigger” Viking appropriately dubbed the Viking VI. As the name implies, the Viking VI is a stretched six-seater “crew” vehicle based on last year’s all-new Viking model.

Unlike competitive crew designs, the Viking VI features six individual bucket type seats, making it more sporty and very room when choosing to rally with just four. With the added seating there remains plenty of cargo space and all the “expected” Yamaha side-by-side goodies such as Yamaha Ultramatic CVT clutching, On-Command 4WD, independent suspension, and four-wheel disc brakes are part of the Viking VI package.

Yamaha made it clear this was only a taste of what to expect from the off-road maker for 2015. Vice President of Sales and Marketing, Peter Smallman-Tew said the new Viking VI was just the first of what will be an expanded side-by-side lineup. “Over the next 15-months, we will expand our side-by-side lineup with two more introductions in categories where we currently don’t compete. Yamaha intends to be a major player in all segments.”