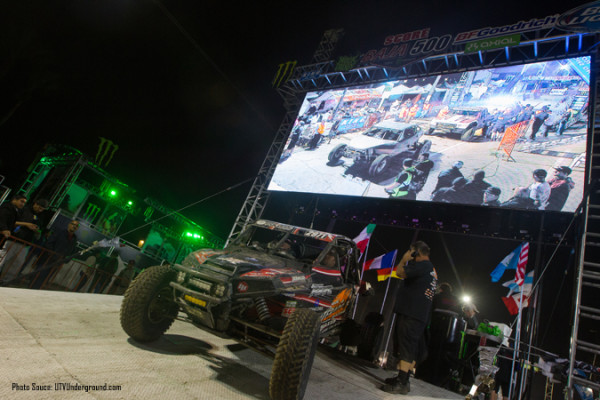 One of the most iconic desert races, The SCORE Baja 500 took place June 1-5th in Mexico’s Baja California Peninsula. This year marked the 48th annual race and the Polaris Factory racers took charge of the Pro UTV FI class and Pro UTV Class. The race is both exciting and brutal and we tip our helmets to all that endure this test of Man vs Desert.  Below is the official word from Polaris on how the team finished up.

Minneapolis, June, 9, 2016-This past weekend, Polaris Factory Racers would endure the heat and a brutal 477-mile Baja 500 course and go one, two in the Pro UTV FI and take a third in the Pro UTV classes.

Fourteen UTVs would line up for the Pro UTV FI class with 10 finishing. Polaris Factory Racer Wayne Matlock in his No. 2971 Terrabit Racing/Jimco Polaris RZR XP Turbo would take the checkered flag and the overall. The win would continue Matlock’s perfect, history-making streak in SCORE, four starts with four wins. Matlock’s strategy of running with the pace early and running hard for the last 100 miles if the race was tight worked flawlessly. Hindered by a bottleneck, he was able to break free and get the lead at mile-340 when he beat the leader out of the pits and ran hard to the finish. Finishing ten minutes behind him was Polaris Factory Racer Justin Lambert in the No. 2918 Cognito Motorsports Polaris RZR XP Turbo.

In the Pro UTV class, there would be four finishers out of 14 starters, all Polaris RZRs, with Polaris Factory Racer and Matlock’s wife, Kristen Matlock, taking third. This would be her first Baja 500 as a driver and would compete in Terry Hui’s RZR XP 1000 EPS that he and Wayne Matlock won the Baja 500, Imperial Valley 250 and Baja 1000 in last year.