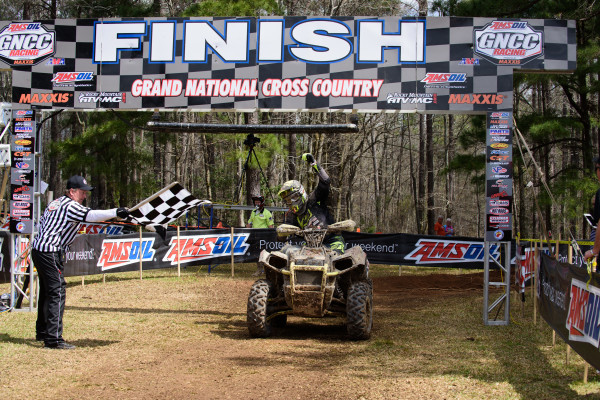 After going one, two at GNCC Round 1 in Florida, Team UXC would put the Scrambler XP 1000 EPS back on the top of the box for Round 2, in Sparta, Ga.

After a superb start to the 2016 Grand National Cross Country season, Pro 4×4 riders Michael Swift and Kevin Trantham were ready to get it done again. Both riders got off the line mid-pack and made good progress through the course. At the end of lap one, Swift and Trantham were sitting second and third, pushing hard for the lead. Before the end of lap 2, they’d moved up to first and second with a 20 second lead. Swift and Trantham looked comfortable up front but were still setting a superb pace. Their machines were working perfectly and looked set to take another one, two finish. With almost a minute lead over third place, Swift hit a tree branch that took out his fan. This caused his motor to overheat and he had to pull off the pace. That left Trantham up front, still with an impressive lead, to take the checker flag and make it another Team UXC/Polaris Factory win.

“It was great to take my first win of the season and the 2nd win for Team UXC Racing,” said Trantham. “The Polaris Factory Racing package put together by Swift showed its strength today.”

The next GNCC ATV race is the FMF Steele Creek, in Morgantown, NC, on April 2. The next UTV/Single-Seat round is VP Racing’s Big Buck, in Union, SC, on April 16.