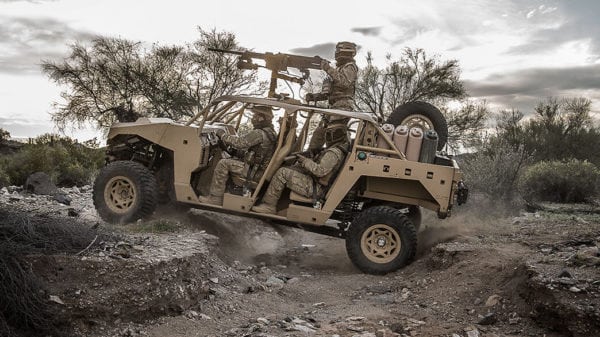 Think your pimping side-by-side is legit eh? Yeah, she’s got some big speakers, thumping audio, big whip antennas, neon lights, and plenty of accessory LEDs; yet your poser ride doesn’t hold a candle to the latest project the United States Military is working on. Seems the big military machine has combined a Polaris military spec side-by-side like the MRZR or DAGOR and outfitted it with laser technology from Raytheon. You read that right…lasers pal, you know Star Wars and Star Trek stuff. Now we’re not saying Spock and the almighty Captain Kirk himself are gonna be driving this beast, but initial plans are for the highly mobile Polaris vehicle to seek out and through the use of lasers, destroy enemy drones. Last Autumn the Raytheon and Polaris team proved that destroying drones with the MRZR HEL armed weapon works. What’s even better, unlike traditional weapons, a laser never runs out of ammunition as long as there is power. Get that drone out of my yard pal.