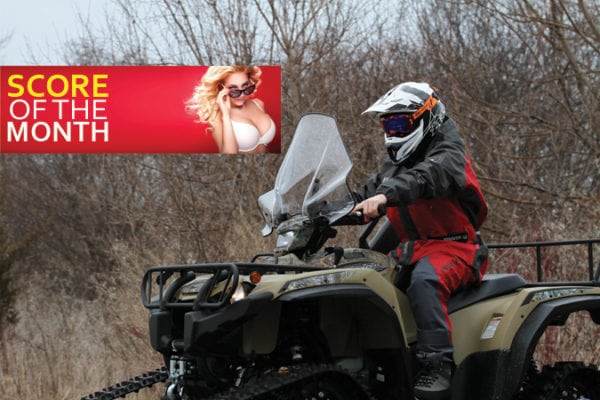 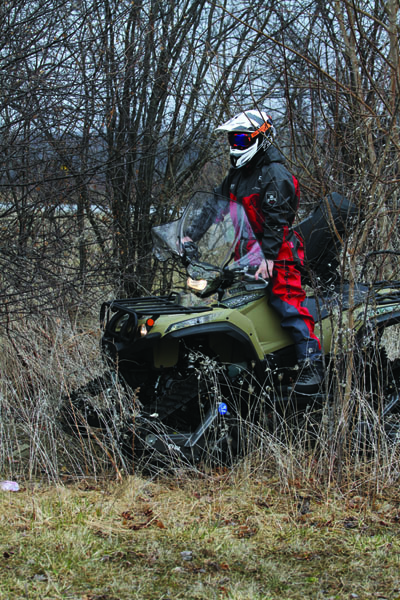 With the winter snow melting away and track kits being removed in place of wheels at ATV World HQ that means its almost our favorite time of year to ride in the Northeast; during the spring thaw. The riding temperature in the spring is near perfect. As the days start to get the longer, the crisp bite of arctic winter air is replaced by warming rays of spring sun. The snow melts away and leaves behind terrain composition of loamy soil and mud holes. It also isn’t hot enough yet to warrant dust. What you’re left with is riding conditions that we prefer more than any other.

As the first spring ride approached we took winter riding gear down to the basement and hauled the spring and summer gear up to the garage. It was then we came across a score from way back in October at the Toronto International Snowmobile, ATV & Powersports Show. Near the end of the three-day show weekend we came across a company new to the North American market, Finntrail. After a long chat about their product line and their background we left the show with their Aquamaster Red Gear Set in anticipation of the spring ride.

Finntrail has over 10 years of experience designing and producing wading gear for a variety of industries. Just because we’ve never heard of them in North American ATV market doesn’t this is their first foray into keeping people dry. They’ve continuously pushed the limits of their products by testing new materials in their waders as well as new design features.

The company actually developed the product right under your nose. Using a variety of riders in Canada, Europe and Russia contributed to the design of their current product line. In fact, these guys are so confident their product they even offer a six-month warranty and two whopping years of free product servicing. That’s competitive with the coverage of some bikes these days.

The Finntrail dealer stretches across Europe from Germany east to Kazakhstan and even as far North as Finland. This tells us they’ve got a product designed for a wide variety of environments. Currently in North America at the time of this article, their product is online available via their website:
www.finntrail.com.

The Aquamaster Red was the only set available when we picked up our suit, however since then the folks at Finntrail have released several new combo options for you to pick from. The Aquasmaster Red may be a three-piece suit but I wouldn’t recommend wearing it to a wedding. The suit consists of a jacket, waders, and boots. Now we know what you’re thinking… how am I going to stay dry if the boots are separate from the waders? Well the waders are actually equipped with durable rubber boots with ultra-cushioned neoprene inner soles that actually slide into the separate standard riding boots. With this setup instead of feeling like traditional waders where the boots are falling off your feet you actually feel as though you’re wearing standard riding gear and boots. You maintain the mobility you’re used to in your dry weather setup but if the opportunity presents itself you can hit any water hole and know you won’t need to finish the ride with the awful feeling of wet boots. 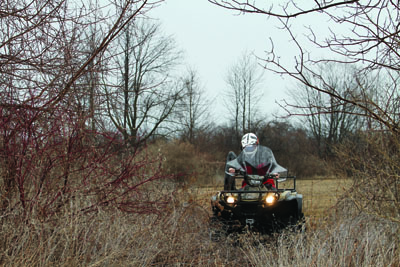 When we finally got to hit the trail with this setup this spring we have to admit, we were hesitant. Would the boots get water logged and heavy? Would there be leaks? The answer to each of those questions was a simple “Nope”. The gear was put to the test immediately as we navigated the snowmelt and the rain but sure enough we stayed dry, comfortable and mobile in our three piece Aquamaster suit. We even appreciated the included waterproof carrying bag for our phone. Being comfortable and dry is the top priority during wet season rides and the Aquamaster set by Finntrail certainly did the job. Usually when you’re suiting up, you have a debate with yourself; do I want to stay dry? Do I want maximum mobility? Well for the first time in our experience you can certainly have both.

As mentioned, currently the only place you can purchase Finntrail in North America is on their website at Finntrail.com. Their customer service team will work closely with you taking several body measurements to make sure you get the perfect fitting gear set and can hit the trail dry this spring.