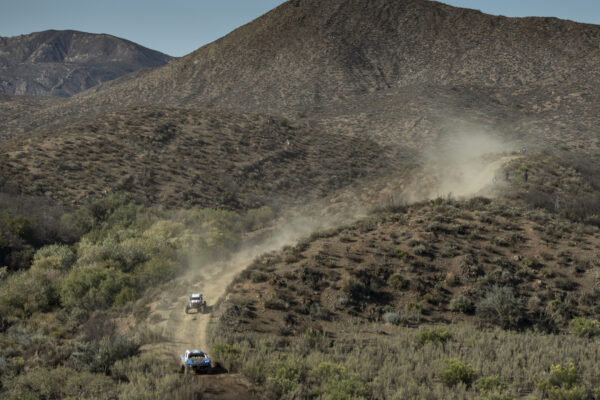 Bitten hard by the Baja Bug, we’ve spent pretty much every November for the last 2 decades south of the border. Pre-running and racing the infamous Baja 1000,competing in this abusive endurance race on ATV’s for 14 years straight, the running joke was that we were only doing it in hopes of landing ourselves behind the wheel of a real-deal race car or trophy truck. Heavily modified and under powered UTV’s arrived around 07-08 but were kind of a sideshow until OEM machines rapidly progressed like the RZR XP900, XP 1000, and into today’s current crop of long travel, turbo-charged Side x Sides. Incredible new machines and factory support has quickly turned the UTV’s into a premier class, with tons of competition and talented drivers. We jumped ship on the ATV class for a UTV and a cage, after a pretty good crash in 2014. While financeable and way more obtainable than a Trophy Truck, UTV’s are still quite a bit more costly to race than an ATV. Budgetary reasons and responsibilities led to only racing select events on our own, but never turning down an opportunity to drive on anyone else’steam. Today’s race ready UTV’s are so good and capable than you will almost completely forget about wanting to race a “real” race car. This is… until you don’t have plans or an invite to race on a UTV team and you finally get that call from your neighbours at the San Felipe 250 with the bad ass Class 10 Car.After 19 years in Powersports classes, my friend Augi Cortez called with an invite to drive the San Felipe section in his very capable Class 10 car. The plan was to pre-run all week on Side by sides and then race be the third off our drivers at this years super Baja 1000. Topping that off, the wife would be racing her second Baja 1000 as my co-driver! Here’s some pics of it all going down!

Did we mention how much UTV’s have grown over the past couple years? A little parking lot trailer modification was in order before even leaving the country.

The wife and I got in two great days of pre-running in our flawless Can-Am Maverick X3. A ballsy move pre-running the remote sections of the Baja course solo, but this car has proven to be incredibly reliable and all we did was stop for fuel

The seldom used and incredibly scenic Amarillo Wash was an incredible addition to this years Baja 1000 course.

This is what “worn out” looks like after an incredibly long day out on an extremely rough course.

In Baja we try to get every last mile out of our trailer tires.

Mike Cafro and Jaime Kirpatrick testing shocks in the San Felipe whoops with the guys from Elka Suspension.

Mike and Jaimie built and prepped this near stock RZR PRO XP in a matter of a few weeks.

Brett Comiskey brings his team all the way from Australia to compete in every SCORE and BITD race aboard this unbelievably nice Lone Star Racing built Can Am X3 Max.

Monster Energy’s main man Matt Burroughs was more than ready for the start of this years Baja 1000, he followed through with a podium finish.

Wes Miller showed up ready as ever to solo this years 1000 after his big win at the Baja 400. A gnarly flu on race day and a power steering issue held him back a little but he still managed a very respectable 4th place finish.

Brandon Schueler’s factory Polaris RZR was running up towards the front in the morning and eventually finished 5th.

Polaris big shot, Craig Scanlon was running up front for a couple hours, had a few problems and managed to salvage a 8th place finish.

This years UTV class saw a lot of serious Mexican teams with competitive cars like this bad ass Can Am X3 from Guadalajara MX.

While they used to dwarf the UTV race cars a few years ago, our Class 10 car doesn’t look a whole lot bigger than some of the current four-seat chassis UTV builds.

Textron, Speed, and Robby Gordon put together a whole stable worth of amazingly prepped arrive and drive race cars.

Jason Luburg, Santo Dersi and a handful of other top East Coast ATV racers got the opportunity to race this Stewart Boys Racing X3.

On the gas and not looking back, Wes Miller was putting his hard earned first UTV starting position and the clean air to good use.

After an intense battle all day long, Cognito’s Justin Lambert was able to best Wayne Matlock for the overall win by just 19 minutes.

Better late than never, getting buckled into the race car in the early AM after waiting through the night.

While the car was covered in mud and a few hours late, we were fresh and the car was still running and handling great.

After an incredible time passing through a handful of competitors and pounding through about 100 miles of whoops, the rear wheel/hub assembly decided to part ways.

Without a spare trailing arm we were S.O.L. and destined for the trailer ride of shame. The worst feeling in Baja after everyone’s incredible efforts to get to the finish.

Our friends Mike Cafro and Jamie Kirkpatrick managed a flawless ride in their near stock RZR PRO XP to win the new Pro Stock Class.

Our friend, and total badass Sara Price made the jump from women motocross to racing UTV’s, to a full ride driving the RPM built Trophy Spec. Sara and co-driver Erika Sacks finished the Infamous Baja 1000 in Second while securing the Series Championship in their first full season attempt.

Dofo Arrellano and Francisco Vera will be running the coveted 1A plate next year after back to back wins at the Score Baja 400 and Baja 1000.