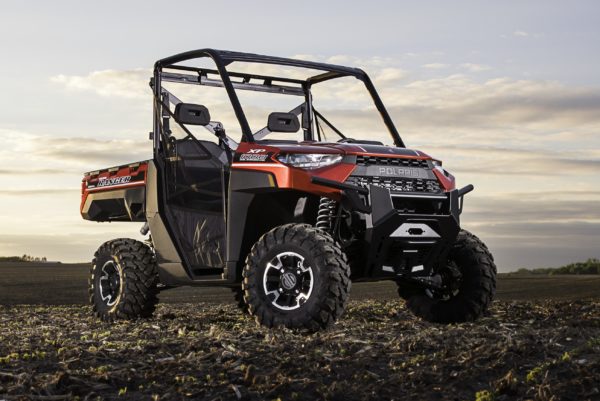 There’s little debate when it comes to pointing out the one side-by-side vehicle that has defined the industry and set the course for success for virtually every manufacturer. While the original Polaris Ranger started out as little more than an engineering “skunk works” project; today the vehicle’s success is likened to that of the Kleenex brand. Ranger’s rocket ride to the top is a formula that is rather simple to define but hard to execute. Incredibly versatile, work ready, rugged and dependable, smooth and comfortable, terrain capable, and fun to drive…those are the characteristics that have defined Ranger success, and it’s those same traits Polaris is hoping to bolster even further with an all-new 2018 Ranger that is said to deliver more in every way.

The official word of the new vehicle and the entire 2018 Polaris off-road line-up came across the interweb late last night, and as we pen this quick recap this morning, ATV World editor Nick Nelson is heading to the Nevada desert to get a first-hand look and possible ride later this week. Until we can get his take on the new vehicles, here’s a 30,000-foot view of the all-new Ranger XP 1000.

MORE AT EVERY TURN – The calling card for the new Ranger vehicle is more…and Polaris has attempted to do this with increased vehicle attributes at every turn. The ProStar 1000 engine now churns out 82-horsepower with 62lb-feet of torque; towing capacity is a whopping 2,500-pounds, and the rear cargo box payload is 1,500-pounds. The cargo box itself has been improved as well with reinforced corners for greater strength, larger tie-down points, more built-in pockets and dividers, and of course it’s Lock & Ride accessory ready.

Down below where the action happens, several key areas of the Ranger have been beefed-up as well. New clutching is said to be stronger and run cooler and is mated to a larger and stronger drive belt. The transmission and driveline have been improved as well, and hidden changes such as a two-piece propshaft for greater efficiency and less unwanted noise; new 27-inch 6-ply tired serve up increased durability; and suspension bushings tout new seals to keep out more dirt and water.

Of course, no mention of a Ranger would be complete without recognizing the brand’s smooth ride calling card. To make it even smoother, the new Ranger now features 13-inches of ground clearance and 11-inches of suspension travel. And while the new found power and greater suspension capability will have you traversing rugged terrain with greater speed and confidence, a 13% tighter turning radius with standard power steering should help the 2018 Ranger navigate tight confines more easily.

Huge bumper and full-skid plate give the new Ranger a menacing look.

Visually the 2018 Ranger makes an impact with more stoic styling and there’s no overlooking the new front bumper. Huge in size, the added protection is obvious, but it’s the detail of the bumper that really caught our attention. Along with traditional integrated accessory mounting points, the new bumper also features a plow mount, meaning you no longer need to purchase the chassis to plow mounting system. Further down, the vehicle features a full-chassis skid plate that according to Polaris delivers 45% more chassis protection.

The new Ranger will also be available in a mud ready High Lifter edition in both standard and crew.

Inside you’ll find a completely redesign interior with a more elegant dash, all new gauge cluster (the same as the one introduced on the General a few years ago), more storage, dual glove boxes, additional cup holders, and a flip up passenger seat (similar to the Honda Pioneer) for bringing along oversized items inside the cab. One of the biggest changes that most owners will surely appreciate are the new contoured seats which deliver more padding for a more comfortable ride.

All Ranger XP 1000 models will also feature standard engine braking and standard Three-Mode Throttle Control which allows you to select one of three pre-programed power-deliver modes from work to standard to performance. The new XP 1000 will be available in both standard and crew models as well as a fully-cabbed NorthStar Editions in standard and crew, and a mud ready High Lifter version also in standard in crew. Pricing starts at $15,299 (US) $18,699 (CAN) for the base model and tops out at $25,999 (US), $32,499 (CAN) for the Ranger Crew XP 1000 EPS NorthStar Edition.