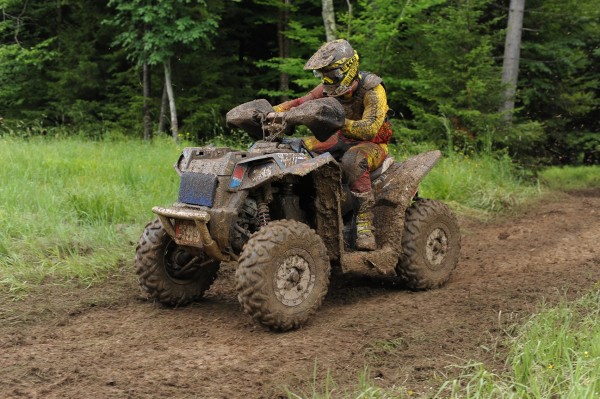 Seems barely a week goes by when we don’t hear about another Polaris RZR or Scrambler finding its way on the box in anyone of the race circuits across the country. This time it was action in TORN and GNCC where Chris Robinson found the top box with his XP1000 and Rick Cecco salvaged a podium finish on his 850 Scram. Here is the official word from the kids at big P.

Last weekend, Scramblers would run at TORN’s Round 5 in Bulcher, Texas and Round 9, GNCC’s Snowshoe, in Snowshoe, West Virginia.

Team UXC Racing’s Chris Robinson would line up his Scrambler XP 1000 at TORN looking for another win. With a field of ten Utility quads and limited passing spots, a good start would be crucial and, when the flagged dropped, Robinson piloted the Scrambler XP 1000 into second place position. Two-miles in, Robinson was able to take the lead and rode home to another win. TORN will be on summer break until September 5, so Robinson will be taking to the desert for Best in the Desert’s Vegas to Reno, on August 15.

In West Virginia, Rick Cecco would suit up for the last GNCC race before the summer break. Snowshoe combines aspects of every other spot on the circuit: rocks, hill climbs, mud bogs, roots and an elevation so high that it can cause a machine to perform much differently. Cecco saw trouble early on with goggles that failed forcing him to pit on the first lap. After the initial stop, he used every lap and the power of his Scrambler XP 850 to gain on those in front of him. Though he was back in the fifth position for laps one through five, by lap six he was able to move into the third position. Through lap seven, Cecco remained in the third position, but had mere seconds between himself and second place. Having only a handful of miles remaining on the last lap, Cecco managed to overtake the second position and grab yet another podium finish. Cecco goes into the summer break in fourth in the 4×4 Pro Class with Team UXC Racing’s Michael Swift sitting in fifth.