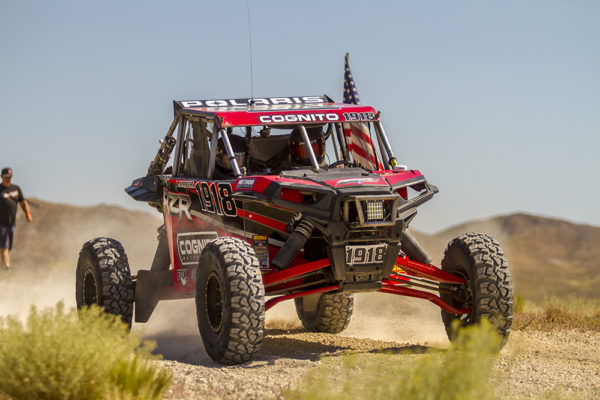 The RZR rumble on the desert race circuit marches on as another slew of victories and podium finishes were recorded as the Vegas to Reno Best in the Desert Race (BITD) came to a close. The dominance of the Polaris RZR vehicles has certainly fueled the development of competitive vehicles by the competition and evidence of this came a few weeks ago with the launch of the Can-Am Maverick X3. The X3 and a rumored new race bred vehicle from Arctic Cat will likely put more eyeballs on circuits such as BITD. Here’s the official release from Polaris on their butt kicking over the August 20-21 weekend.

Polaris RZR continues to show sheer dominance in the Best in the Desert Racing Series (BITD), winning 11 of the top 12 Pro UTV finishes and the top two overall in the General Tire “Vegas to Reno” The Long Way presented by FOX.

Polaris Factory Racer Justin Lambert and his No. 1918 Cognito Motorsports RZR XP 4 1000 won the Pro Production class AND was the fastest UTV overall.  Lambert and his team have been on an incredible run: currently on a five-win streak, including back-to-back Vegas-to-Reno wins and two overall UTV wins this season. That’s especially significant as the team competes in the non-turbo UTV class and continues to outdrive the higher-horsepower, turbo UTVs.

It was another dominant performance for Team RZR, during which 45 of the 65 UTV entrants were RZR, including 11 of the top 12 finishers. The next BITD Race is Bluewater Desert Challenge, presented by Polaris, Oct. 6-9.