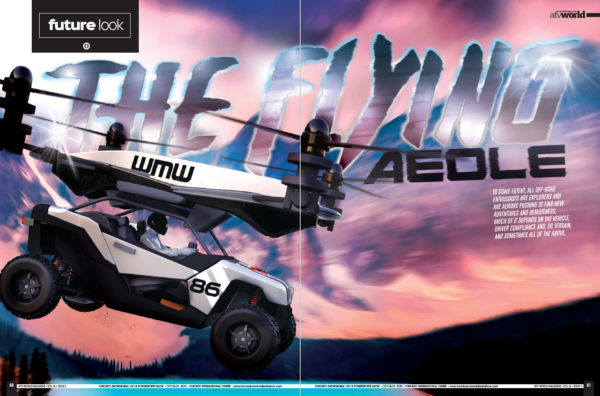 To some extent, all off-road enthusiasts are explorers and are always pushing to find new adventures and remoteness. Much of it depends on the vehicle, driver compliance and, or terrain, and sometimes all of the above.

Charles Bombardier had these obstacles in
mind when he imagined the Aeole as a vehicle that would eliminate many
variables when exploring. The flying Aeole is an electric, autonomous vertical take-off
aircraft that would be designed to pick up and fly a fully loaded Side-by-Side
over any obstacle.

The Aeole would change how we travel with our Side-by-Sides; imagine being able to quickly cross a large body of water that would take a day to get around, but only minutes to fly over. If the terrain became to rugged and seemed impassable, the Aeole could assist to fly over any terrain, making off road travel easier at times, and also allowing the off-road enthusiasts to go even further than previously imagined.

The Aeole would be created using existing
technology like the Ehang 184 AAV autonomous vehicle. The Ehang focuses on
short to medium travel distances, and is said to be the safest and smartest low
altitude autonomous aerial vehicle. This type of technology would be perfect
for what the Aeole is designed to do with a Side-by-Side.

With the Aeole being an electric, autonomous vehicle, it’s designed to be able to carry the weight of a fully loaded Side-by-Side, with a safe flight duration of 30 minutes. If there were any malfunction with a component or a disconnection, the Aeole would land immediately.  After the delivery of the Side-by-Side, the flying Aeole would have to fly itself to the nearest solar charging station, using its eVTOL (electric vertical takeoff and landing) capacity.  Charles’s vision includes the Aeole flying away when not in use to a charging station, waiting for its next summons to help cross the next obstacle.

Charles also has a vision that Aeole could
be fitted with two combustion aircraft engines such as the Rotax 915 iS, in lieu
of electric. To some, this might be more realistic in 2020, but maybe not in
the near future. The Rotax 915 iS aircraft engine is a four-cylinder,
four-stroke turbocharged, air/liquid cooled gas engine with 141 HP, and would
be a perfect fit for the Aeole. Currently, these engines can be found on ultra-lights,
homebuilt and light, sport aircrafts, as well as small helicopters. In
Charles’s version of a gas powered Aeole, there would be two Rotax 915 iS
aircraft engines producing a total of 282 HP.

The Aeole could be the future of 3D
powersports transportation for not just Side-by-Side vehicles, but other
vehicles like snowmobiles, ATVs, PWC, and even motorcycles. All of these
vehicle owners would benefit by having the ability to be transported above
delicate or hazardous terrain using various types of eVTOL machines like the
Aeole.

The future might be larger than a single Aeole owner. Picture Aeoles stationed across, and owned by a Province, State, or trail federation where there is a need to transport around an area such as a lake, river or delicate environmental area. For a fee, the Aeole would take you to the other side of the hazard and fly back to the charging station to wait for the next fare.

The Aeole concept was imagined in June 2019
by Charles Bombardier, and designed by Jorge Ciprian, an Industrial Designer
from Argentina. Jorge graduated with a degree in design from the University of
Buenos Aires, and he currently works as a freelance designer. Jorge also
created the images of the Fountainhead drone parking tower and the Solorocket
launch complex for Imaginactive.