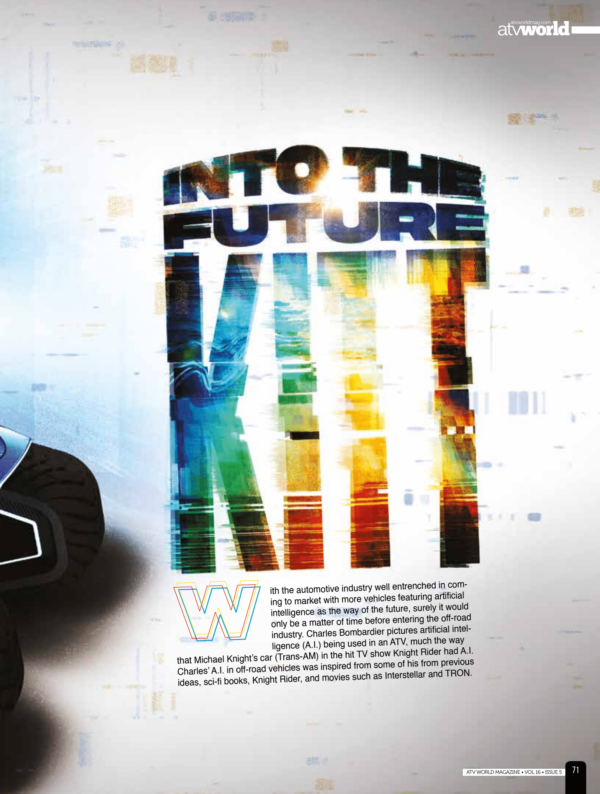 KITT is an artificial intelligence module combined with a hybrid powersports vehicle. This novel AI system would be with you every time you ride, noticing your driving behavior and preferences to adapt to your style and mood.

The Origin of the Idea

The inspiration for this idea comes from previous ideas, sci-fi books, TV shows like Knight Rider, and movies like Interstellar and TRON. I wondered how it would be possible to give customers a truly unique experience that goes beyond autonomous driving. The result is KITT, which reinvents powersports as we know them by combining AI with a series of new technologies and vehicle configurations.

KITT would boast a retro-futuristic design with a rectangular frontal digital display located in its facia which could develop its own pattern or be modified on the fly by the pilot.

KITT would be capable of assisting drivers in performing all kinds of neat tricks. The special handle bars could be used to negotiate curves faster, with the pilot leaning outside the vehicle without having to fully concentrate on the vehicle’s equilibrium. The precise electric powertrain would allow the user to do wheelies and adapt the thrust based on different soils. Steering could be achieved using a mix of pressure, eye tracking, and thoughts.

The vehicle itself could be modified with various types of tracks and wheel attachments. The bioluminescent coloration is akin to a TRON lightcycle. It could adapt to your mood or the rider’s evolving signature.

KITT’s machine learning software would be embedded in its onboard control module and connected to a cloud-based system to share and improve itself over time. This personal AI (artificial intelligence) would be able to follow its owner between different vehicles (ATV, Snowmobile, Spyder, Car).

The AI would mostly be silent at first, as it would learns the user`s driving behavior. The pilot could tell the AI what they want and prefer. For instance, executing a 300-foot-long wheelie whilst remaining completely balanced, slowly driving autonomously on scenic trails, accelerating hard and fast in long curves, avoiding other riders (or seeking them out), etc.

Once the system has mapped your driving style, reactions, and preferences, it would interact more and provide recommendations based on your varying goals. Everyone is different, so to be successful, KITT would need to watch, learn, and understand human emotions. This could be done by reading brain waves from within the pilot’s helmet and listening to his verbal or gestural feedback.

KITT’s AI would also be aware of each vehicle’s parts and systems. If, for example, certain parts of the vehicle needs to be serviced, it could communicate with the owner’s preferred dealership and obtain quotes that would be sent to their phone for a quick approval.

A version of the system could be designed to monitor and detect any condition that would render the user unfit to drive, such as being overly tired or under the influence of drugs or alcohol. In fact, Kitt could even take over in such cases. Most importantly, it could alert emergency services (or local riders) if a medical situation arises (like a trail accident) and drive to the nearest hospital if necessary.

The Kitt AI system is a feature that could change the powersport market forever because it would take the industry a step beyond the autonomous systems in development today. It would be developed to reduce stress, prevent accidents, and improve the fun factor for every powersport rider.

The modular powertrain and steering system would enhance and complement the driving experience. These features would need to be engineered and designed based on market pull. Is there interest for pushing the boundaries of technology this far? That’s why Kitt is simply a conceptual idea at this stage and your feedback is important.

The Kitt concept was inspired in part by the Perceptor concept, published in 2017. Both ideas were imagined by Charles Bombardier. The 3D design is by Adolfo Esquivel, a freelance industrial designer based in Montreal who has created many designs for Imaginactive.