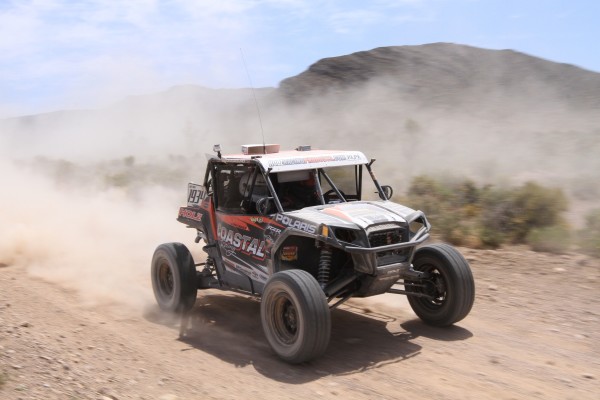 The podiums continue to pile up for Polaris in the desert racing scene in the southwester United States. While the competition has stepped up their game, Polaris and the RZR is still claiming most of the top spots and the big P couldn’t be happier. Here’s the official marketing spun recap from Polaris.

Minneapolis, May 6, 2013–After a win at the last Best in the Desert Race, The Mint 400, Holz Coastal Racing’s Scott Kiger and Mark Holz in their No. 1934 RZR XP 900 would line up for the Canidae Tap It Silver State 300 with hopes to make it two in a row and their second Silver State 300 win. When the dust settled, they would not disappoint.

With Cognito Powersports and their RZR XP 4 900 getting the nod to start first, the teams would have to work hard through the typical high-speed, dusty conditions to overtake the leader. Coastal Racing would start right after Brandon Schueler’s Jagged X No. 1919 RZR XP 4 900 setting up a speed dual to take over the lead. With Kiger driving the morning half, he would pass Schueler and all but one of the remaining cars that started in front of him, Cognito. Holz would take over for the second half of the race and suffer a couple flats moving him back to third, and putting the No. 1919 in second behind Cognito. With Cognito sitting with a 7-minute lead and Jagged X and Coastal running neck-and-neck, Cognito would suffer a clutch failure ending their reign and setting up an exciting finish between Jagged X and Coastal Racing. In the last miles of the race, Holz in the Coastal car would make his move finish first with Schueler in the No. 1919 finishing second.

The next Best in the Desert Race is the General Tire Vegas to Reno, August 15-17.