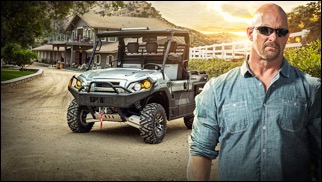 As Kawasaki celebrates the 30th anniversary of the MULE side-by-side, the company has bolstered their relationship with former pro wrestler and television/movie personality Steve Austin. Austin, who currently hosts the show Steve Austin’s Broken Skull Challenge, where he utilizes a Kawasaki Mule on the show, will host commercials featuring the new MULE PRO-FXR model as well as other videos which showcase the features and benefits of the entire MULE lineup.