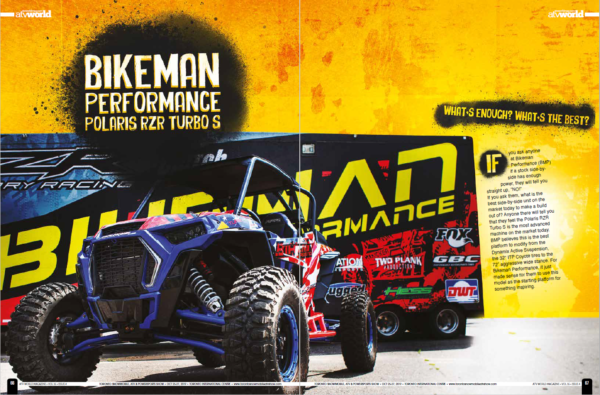 If you ask anyone at Bikeman Performance (BMP) if a stock side-by-side has enough power, they will tell you straight up, “NO!”

If you ask them, what is the best side-by-side unit on the market today to make a build out of? Anyone there will tell you that they feel the Polaris RZR Turbo S is the most advanced machine on the market today. BMP believes this is the best platform to modify from the Dynamix Active Suspension, the 32” ITP Coyote tires to the 72” aggressive wide stance. For Bikeman Performance, it just made sense for them to use this model as the starting platform for something inspiring.

Like most custom builders there is usually a go to part or mod used at the starting point that all other mods are based off of. For Bikeman Performance their starting point and go to mod is their own Stage 2 Bolt-On Performer Kit (B.O.P.K.). The Stage 2 B.O.P.K. includes an ECU Programmer, the Big Mo Full exhaust system, BMP blow off valve and primary and secondary clutch springs using adjustable clutch weights.

This kit has a great return on your dollar. A few benefits of this kit is the ECU programmer is that it raises the RPM to 9000 in both high and low gears, speed limit is raised to 96 MPH, and it eliminates throttle limiters, increases horsepower and torque, lowers the fan turn on-temp to 183 degrees and has a great and easy to use weather resistant display screen. Other parts the Big Mo is equipt with is the full stainless steel exhaust system, which is fully developed in house at BMP and is all made in America. The Big Mo Exhaust system allows the turbo to run cooler which increases longevity of both the turbo and the exhaust valves. It also produces gains in both horsepower and torque in low and mid range power. In some ride locations noise is an issue, the Big Mo Full system is compatible with both a ‘whisper biscuit’ and spark arrestor. The primary and secondary clutch springs and adjustable weights are very important to the B.O.P.K., giving the machine more top speed, quicker back-shifting, less belt slip, and will make the unit feel more responsive overall.

While most RZR Turbo S owners would be over the moon with the performance that the Stage 2 Bolt-On Performance kit delivers. Bikeman Performance wanted even more performance to put some distance between them and the competition, therefor they added the Big Mo Turbo mod which is an easy direct bolt-on modification. The Big Mo Turbo mod comes with larger injectors which increases airflow and can increase the boost to an impressive 27+ pounds. However you are now entering the need to run race fuel only with this type of boost increase.

MORE POWER MUST HAVE MORE COOLING

BMP added a Charge Tube Kit to lower boost temperatures and to eliminate the system of blowouts and cracking when running at full boost. Another potential hazard is engine heat, however by installing the BMP Mo-Flow Water Pump impeller, this creates an additional 20% of flow at all RPMs over the stock impeller. The Mo-Flo impeller also fits into the stock housing which is a bonus and a cost saver. Further cooling is accomplished with the BMP Cyclone Clutch Cover. The Cyclone Clutch Cover reduces belt temps by up to 50 degrees.

In order to maximize horsepower, torque and throttle response, to achieve a smooth idle, and a steadier power delivery, a Energycoil Iginition Kit was installed. This will help with the overall smoothness of this Bikeman Performance Polaris RZR Turbo S.

When we first locked eyes
with this buggy and went through the list of modifications, our first question
was, “How much horsepower is this buggy producing?” Try 290+ HP (stock is 168
HP)… that’s right!

If you don’t think you have the required stones to skillfully drive this 290 plus horsepower buggy, maybe start with the Stage 2 Bolt-On Performer Kit (B.O.P.K.) and gradually work your way up.

WRAP IT BEFORE YOU USE IT

Nothing says it’s a budget build without a custom paint and or sticker package. BMP did it right and made their custom Polaris RZR Turbo S stand out from the rest, and as soon as the shop door opened and it backed out with a Blown Concept American Flag wrap, our jaws hit the floor.