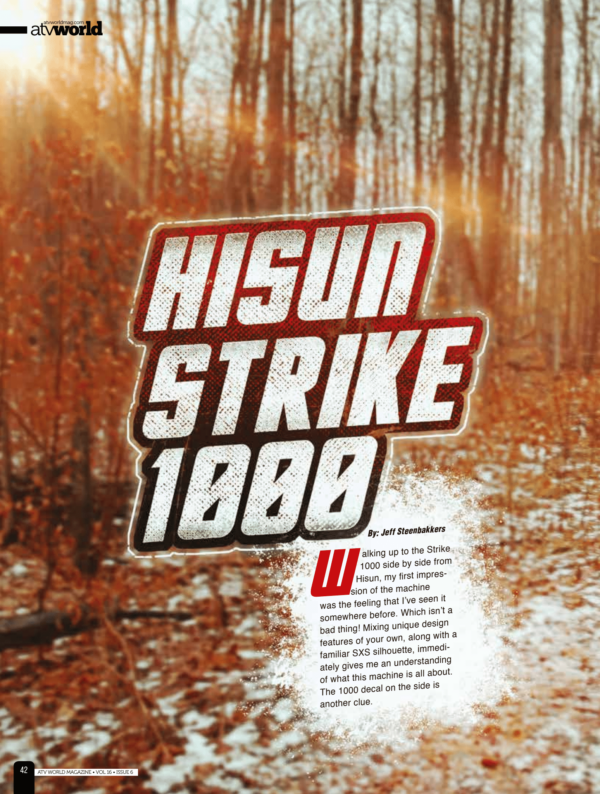 Walking up to the Strike 1000 side by side from Hisun, my first impression of the machine was the feeling that I’ve seen it somewhere before. Which isn’t a bad thing! Mixing unique design features of your own, along with a familiar SXS silhouette, immediately gives me an understanding of what this machine is all about. The 1000 decal on the side is another clue.

From the outside, it’s clear to see that the Strike 1000 is built for business. On all four corners, you’ll find 27 inch all terrain style tires mounted on blacked out aluminum wheels, then there is a set of huge YIT piggyback shocks in-behind the rolling stock. These shocks are also tuneable with both compression and rebound damping, along with a treaded collar for setting preload.

Other accessories that are included with the Strike include a 3500-pound winch mounted low on the front bumper, a windshield that’s easily removable with a clamp system around the roll cage, along with a roof and rear-view mirrors mounted the cage as well. Buried a little deeper in the chassis, the list of standard features grows with electric power steering, locking rear differential, CVT clutch, and a 976cc EFI V-Twin between the frame rails.

There is also the standard compliment of integrated turn signals, horn, emergency flashers, and an automotive style gauge package that pairs the sweep of an analogue tach and speedometer with a digital display, with more information for the driver. These features may seem a little off-shore when first encountered, but come in handy for licensing the Strike for the street if required in your area.

All in all, the Hisun offers a fully featured vehicle for a considerable cost savings over its domestic competitors. That said, the vehicle still has to perform at the same levels of expectation as compared to its competitors, despite its lower cost. Here, the Strike 1000 performs within “striking” distance of other brands.

From the driver’s seat, the Strike is roomy, with the all the controls well laid out. Personally, I didn’t like the net safety restrains compared to an actual door, but at least the simple seat belt style clip made them easy to use. With the engine running, the EFI fired up quickly and purred with a throaty V-twin sound. Power from the engine is in the 65-horsepower range. A little on the low side for a 1000cc machine, but more than enough to get the job done. The throttle tip-in and clutching are a little clunky at first, but with some time, smooth out nicely with muscle memory.

At speed, the Strike has more than enough power to top out above 100kmph in high gear, as well as break the tires loose for a spirited ride at trail speed. Slowing things down, the grip of the Wanda tires balances out nicely with the power for simply cruising or technical riding. I did find myself wanting to shift into low quite often to put a bit more power to the wheels when climbing obstacles. Changing out to more aggressive tires would also mean running in low gear a little more often too, especially in deep mud.

Handling wise the Strike performed very well. It was predictable, even though there seemed to be a bit more body roll then I’m used to. The high-end shocks are also adjustable, and changes can be felt as you work the compression and rebound clickers. I did find that multiple clicks were needed, in order to feel a difference in the seat of your pants. However, the complexity of the shocks with so many adjustments may take some trial and error to optimize for novice drivers. I would suggest jotting down starting points and the changes you make, so if things go pear-shaped you can get back to your initial setup.

Another feature I liked was the unlocking rear differential. This machine is fairly wide at 65 inches, so this feature is not only handy for turning around on your front lawn, but also made the machine a little easier to manoeuvre around in tight terrain. Also assisting the directional changes is an electronic power steering system. Often reserved for more expensive models, the EPS system makes for a light feel in the steering wheel at low speeds.

Additional comments from behind the wheel would be that the Strike is a great vehicle for the price. It does fall short when compared to some of the much more expensive domestic offerings, but these shortcomings are only really apparent when you jump out of one of these other brands, (that could be as much as twice the MSRP) back into the Hisun. For the savings that the Strike 1000 offers, I totally forgive it for its slight decrease in all-out performance. In addition, given the return on investment of the Strike 1000, this is a great machine for people just getting into the side by side market. At this price point, the Strike is absolutely a viable option over similarly priced machines in the used market, especially when the Strike is backed up by a 2-year warranty.